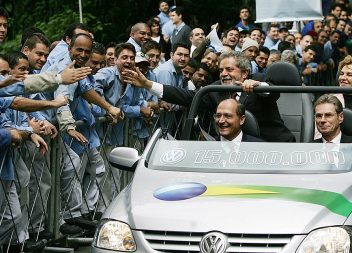 On 10 March 2021, many Brazilians felt a ray of hope when ex-President Luiz Inacio Lula De Silva’s corruption charges were quashed by a Supreme Court judge on the technicality that Lula was tried by a court which did not have jurisdiction. Brazil has been in turmoil since the COVID-19 outbreak due to the actions of a fascist dictator. The Lula judgment opens the way for him to challenge President Jair Bolsonaro. With a divided Workers Party (Partido dos trabalhadores) it was difficult for someone to pose a real challenge to the incumbent President.

Why is Jair Bolsonaro one of the world’s most dangerous men?

On 1 January 2019, many political analysts in Brazil and around the world believed that the country would experience democratic backsliding under Bolsonaro. His Vice-President Hamilton Mourao had always flirted with fascism by praising Brazil’s military dictatorship from 1964 to 1985, claiming the military coup prevented a communist takeover. Bolsonaro and Mourao had strong support from the evangelical community, especially the Pentecostal Church, which believed that Bolsonaro was the only person who could save them from the PT’s socially liberal policies. The common people had lost trust in the Worker’s Party due to their various corruption scandals. They wanted a change in leadership at the national level. Little did they know their actions would have dangerous consequences.

One of the crucial issues which Latin America is facing right now is the annihilation of the Amazon rainforest, one of the world’s greatest allies in combating climate change. Indeed, it covers 9 separate states in Latin America and its massive collection of flora absorbs 5% of the world’s carbon dioxide emissions. Additionally, it is crucial in controlling greenhouse gas emissions across Latin America. Since 2019, the fires which rampaged through these rainforests have led to a worrying decrease in carbon absorption. This immense reduction of the forest could have disastrous consequences such as aggravating the global climate crisis. The long-term effects of these fires coupled with deforestation would also lead to social and economic instability across the whole region.

In August 2020, Bolsonaro dismissed the Amazon fires as a “lie”. His persistent denials of the situation have prevented foreign governments and NGOs from finding a solution to the crisis. He claims that domestic and international environment advisors are violating Brazil’s sovereignty in their efforts to preserve the region.

Investors are pledging to withdraw 2 trillion USD worth of economic aid from Brazil in response to the constant repression and denial of the Amazon crisis, which could result in a complete disaster. The destruction of the Amazon would imply a huge setback in tackling the global climate crisis.

In addition, during the COVID-19 pandemic Bolsonaro’s denial of science and dismissiveness towards health experts has led Brazil down a dangerous path.  He discarded mask-wearing and lockdown restrictions, as it was more important for him to keep the economy going. But Brazil has one of the highest Covid death tolls in the world. During most of the pandemic Bolsonaro also rejected purchasing vaccinations, even claiming that he wouldn’t get one himself as “the Pfizer vaccine might turn people into crocodiles”. But his view on vaccines has taken a U turn with Lula’s return to politics. He now embraces the vaccines claiming that they are the weapon out of this crisis. This illustrates that Lula’s presence in the opposition has him threatened.

Can Lula save the country from anti-intellectualism?

Despite Lula being a strong opposition candidate in the upcoming elections, he still remains a polarizing figure in Brazil. The Brazilian evangelical community and the traditional conservatives are against the old-fashioned left wing of Brazil, and Lula also lacks favour among political centrists. The analogous situation would be Donald Trump facing off against Bernie Sanders in the US Presidential Election.

Lula’s annulled conviction could still be challenged in another court as he has not been cleared of any wrongdoing yet. The key to his possible presidential run would be addressing the ongoing pandemic, making people trust in science and facts about the threat of this virus. He needs to move the people away from the alternate reality Bolsonaro created. With the rate infection still increasing in the country and Bolsonaro’s refusal to impose restrictions, this could be the wiggle room Lula needs to truly contend. He should also reach out to the Amazon indigenous communities who are struggling to survive with their homes burning in wildfires.

Hence, preservation of the rainforests and getting the pandemic under control should be Brazil’s top priority. Only time will tell if Lula can be a messiah for the Brazilians who have suffered multiple crises over the past two years. Lula’s return to politics could be Bolsonaro’s Kryptonite. Lula undoubtedly will face many hurdles before next year’s election. If he chooses to serve the needs of the people over money and power, he stands an excellent chance of victory in 2022.