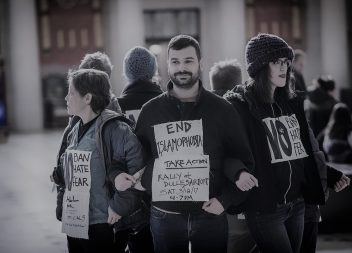 Islamophobia is heavily discussed in Western discourse as a European crisis, despite recent cases reflecting animosity towards Muslim populations across the globe. The persecution of Uyghur Muslims in the region of Xinjiang in China, where Uyghurs are being detained en masse in Chinese “re-education camps” and facing severe human rights violations, the accusations against the Muslim population in India for the spread of COVID-19 in the name of “CoronaJihad”, last year’s Christchurch mosque shootings in New Zealand, and the targeted killing and displacement of Myanmar’s Rohingyas highlight that Islamophobia is not only a European crisis. It is global.

2. Definitions of Islamophobia are fundamental but not ultimate

Islamophobia is global – ok, but so is racism, sexism, and xenophobia. So, why do we address Islamophobia separately and who gets to define the term in the first place? First, it is important to define Islamophobia as a separate term, since anti-Muslim prejudice has increased markedly in recent decades. By naming this form of discrimination, it acknowledges its victims, raises awareness of their specific struggle, and prevents denial of widespread prejudices. However, as important as the very existence of the term is, we must ask ourselves what definition of Islamophobia is being discussed in politics and the media. In Britain, the Conservative Party claimed in 2019 that ‘Islamophobia’ cannot be defined in a meaningful way, which raised questions about the legitimacy of the state in defining (or failing to define) the term. For that reason, it is important to question the definition used in public discourse and to keep in mind that some definitions can do more harm than support to Muslims, especially when they incorporate negative connotations and lead to even more discrimination.

While Islamophobia is a global issue and is relevant to discuss as a specific form of discrimination, it is equally important to stress its different levels. The media often portrays large-scale Islamophobic incidents such as the current situation in France, India, China, and Myanmar. While it is key to discuss these severe forms of discrimination, Islamophobia cannot be regarded as an issue which occurs only in such high profile cases. It happens everywhere and all the time. Whether Islamophobia  takes the form of extreme violence, discriminatory comments in public spaces, or in a feeling of constant insecurity for Muslims –it is ever present. At the same time, Islamophobia is reproduced institutionally through counter-terrorism initiatives especially after 9/11. In this context, when Barack Obama called on the Muslim community to speak out against terrorism, we must ask ourselves why Muslims as believers need to dissociate from acts of terrorism from Islam in the first place.

4. Islamophobia is not genderless

After having discussed different levels of Islamophobia, we must also tackle the issue through a gendered lens. Islamophobic rhetoric portrays Islam as a misogynistic religion that oppresses women. While religion must always be examined critically with regard to gender roles, stressing women’s invisibility within Islamophobic discourse is highly discriminatory and dangerous. “The obsession with Muslim women’s plight” reflects colonial thinking as well as it puts them in the center of Islamophobia by stressing their passive victimhood. Therefore, the narrative of oppressed women not only deprives women wearing hijab of their agency as feminists, but also victimizes women disproportionately by Islamophobia. This gendered Islamophobia must be detected and replaced by a constructive discussion about gender roles beyond religion, race, and culture.

With these four issues in mind, we should return to the current Eurocentric discourse and ask ourselves how Islamophobia in Europe connects to Islamophobia in other parts of the world, who suffers in particular from this anti-Muslim prejudice, and from whose perspective Islamophobia today is being discussed. Only then can we do justice to this issue and tackle it holistically.

Hanna is one of the current Co-Editors in Chief for (Re)Imagining Peace + Justice. View all posts by Hanna Uihlein

2 thoughts on “Why Islamophobia is more than a European Crisis”