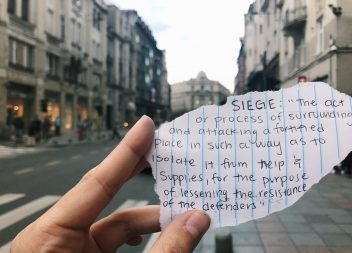 I arrived in Bosnia and Herzegovina (BiH) for a Humanity in Action Fellowship in 2017 properly jaded. I had just completed a year-long stint with the U.N. office of PAX, where I worked on a series of reports outlining the particular cruelty and inhumanity of the sieges in Syria at the height of media coverage of the siege of Aleppo. It’s safe to say that I had a lot of feelings about spending the next month somewhere that had been kept under the longest siege in Europe since WWII.

A frequent theme my cohort returned to—as is often (justifiably) the case in these conversations—was the failure and inadequacy of organizations such as the U.N. or USAID, and the Western states that frequently dominate them, to deliver on their promise to protect civilians and maintain international peace and security. And this is a fair point, the U.N. is one of the most powerful international institutions, but still is unable to effectively prevent, end, or resolve violent conflict—and if the UN is unable (or unwilling) to stir up political will to prevent or end conflicts, then what hope is there?

During one incredibly poignant moment of my month in BiH, I was sitting at the back of the bus with a member of my fellowship who had lived through the war. He told me that as a child he hated the U.S. because of its inaction and resented having to suffer through trauma that no one should have to, while the U.S. stood by waiting, watching, pretending to care. But that wasn’t what stuck with me—it was that he shrugged, rather casually, and said, “but look at what is happening in Syria, and here I am, I’m doing nothing. So, who am I to judge?”

But isn’t that the whole point of an international community? Aren’t we exactly who is to judge? If not each of us, then who will judge the massive failure of the West and its international institutions?

It is in the spirit of these questions that I compiled this photo essay during my time in Sarajevo. I wanted to highlight the hypocrisy of what the U.N. presents in official documents versus the lived experience of conflict. I was inspired by my colleagues—as well as the speakers who addressed us over the month we were there—to explore a Sarajevo that feels quite distant from the city you’ll find today. It is actually there, right below the surface, which in many ways feels like it is begging to be shown, not to be forgotten. I spent several days reading through UNSC resolutions about Bosnia, especially any that were around key dates and times. I explored the few resources online about the siege, and compiled enough information to create my own “walking tour” of the city.

I wanted to explore things that felt important to me personally, but also call attention to sites that—specifically tourists—might walk past without a second glance. Because of this, all of the sites photographed are easily accessible, notable, and are frequently seen or visited locations. The project is organized more or less chronologically, in order to give the viewer a visual timeline of the siege. The third photo in the series is irony meeting irony, as the canned beef monument—a literal larger than life rendering of a can of beef much like the ones dropped by ICAR, which Sarajevans would “rather die than eat”—is itself a jab at western aid agencies’ complete failure to provide humanitarian assistance.

In the background of the fourth photo, you can see the Hotel Holiday—the infamous yellow hotel that was notoriously inhabited by journalists bravely covering the siege—sitting along what was once one of the most dangerous streets to navigate, but is now one of the main thoroughfares and trolley lines in the city. The photo of the brewery was taken only one block from my apartment in Sarajevo, which felt exceptionally moving, to learn that there had been, within my lifetime, a massacre at a place I had just gotten drinks.

The photo after this one is taken at the Markale Market in the center of the city, where some of the largest massacres once took place at the height of the siege. Today there is little more than a memorial wall, mostly hidden by the vendors. The Sarajevo Rose depicted is not one of particular note, as these memorials span the city, serving as their own unassuming reminder that we are never too far from history. I wanted to remind both myself and others, through the juxtaposition of the official documents about the conflict with the current state of the city, that the consequences of our actions are not theoretical—as they can sometimes feel as we sit in our comfortable London classrooms—but are in fact painfully real.

It’s something I have come back to a lot during my time at SOAS. As students at a highly critical university, learning about international institutions, norms, transitional justice, and peacebuilding through decolonial and feminist perspectives can make the world seem disheartening—but at the same time it helps prepare you for the realities of how the world functions. That being said, it’s natural to feel burnt out every so often, to wonder why we’re even bothering or if we should have just gone into banking or marketing. Or worse, to feel like you’ll have to end up working for and perpetuating the very systems about which you’ve spent an entire post-graduate degree learning. Because I very much want to continue working in the field of advocacy and transitional justice, this is something I have to reconcile on a daily basis.

This was as maddening to navigate in BiH as it is today. Once you become aware of just how deeply broken everything is, it is incredibly daunting—and to be frank, depressing—to feel like one day it will be up to you to fix it all. I wish I could tell you that I’ve come to the solution, but I think we’ll have to keep on working through it together. I desperately want to do something right in a world that makes it feel nearly impossible, I hope that exploring what you can do when your faith is shattered can be one small thing to help us understand our positionality a bit better.

Rachel Salcedo is reading for an MSc in the Politics of Conflict, Rights and Justice. She is one of the founding members of (Re)imagining Peace + Justice and currently serves as a Senior Editor. View all posts by Rachel Salcedo