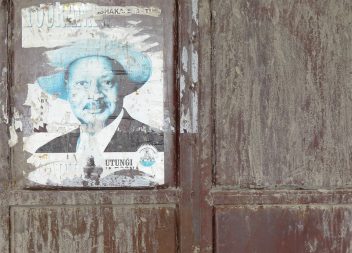 Old Man Robert Mugabe, former long-time President of Zimbabwe and Facebook icon (see “Robert Mugabe Quotes”, where fake quotes are published as “the renowned Statesman’s commentary on the fast paced times we now live in”), was forced out of office in 2017. Since 2017, Uganda’s President Yoweri Kaguta Museveni finally ranks in the top-three longest-serving leaders of the continent.

Certainly, Museveni is one of the most iconic leaders: the East-African President, often abbreviated as “M7” by his subjects, is well-known for showing up with a tremendous cowboy hat and colourful yellow shirts. M7 has sparked laughter not only among Ugandans, but also among members of the international community. He is known for being colorfully ostentatious, once telling his people, “It is dangerous to stick a finger in the anus of a leopard because you are in trouble” (referring to himself in the context of upcoming elections) and, “the mouth is there to eat and not for oral sex.” He invited Kanye West and Kim Kardashian to the State House and publicly offered himself to be a mediator in the Israel-Palestine conflict in front of a high-level Israeli diplomatic delegation commemorating the 40-years anniversary of “Operation Entebbe” (during which Israeli Prime Minister Netanyahu’s brother was killed).

Clumsy on the outside, but what is behind the curtain?

Museveni’s  public appearance can hardly be called anything but clumsy; he appears to be a friendly grandad figure who does not hesitate to stop his several-dozen vehicle convoy to make a phone call on the roadside before taking photos with local villagers. But behind this facade, Museveni is everything but a friendly grandfather. In fact, the Bush War (1981–86) veteran has profiled himself as a ruthless strongman with a natural sense for power. After brutally cracking down on separatist movements and rebel groups in Northern Uganda, he successfully used international justice mechanisms (such as the ICC) to prosecute whoever was left of his opponents in the region. He conducted crack-downs on media outlets and intimidated and persecuted a variety of opposition movements.

Museveni consistently adapted his strategies to sufficiently match whatever dissident thought sparked throughout Uganda. This did not only include the obvious rigging of elections in 2016, but he has also successfully led a campaign to remove the presidential age limit from the constitution after protests sparked over an attempt to change his own birth date. But that is not all: during his more than 30-years rule, “M7” sacked powerful competitors from his own party, including the former Prime Minister, Amama Mbabazi and the former Inspector General of the Police, Kale Kayihura. Besides favouring members of his own tribe in government positions, he established a dynasty: Museveni made his wife a minister (several times) and appointed his Sandhurst-educated son, Muhoozi, as a Presidential Advisor, possibly paving the way for the him to take over the presidency of the East African nation in the future.

The People v. The Government?

Recently the Ugandan government introduced a so-called “social media tax” as a reaction to “gossip” allegedly published in social networks and spread through messenger applications. The objective of the new tax, apparently, is to target the young, urban, poor populations of Uganda’s capital, Kampala, and other big cities — those people that have the tendency to support the opposition movement of “Bobi Wine”, a prominent self-made music star from one of the poorer areas Kampala.

Bobi Wine, by the real name Robert Kyagulanyi, became an elected Member of Parliament in 2017. He was arrested several times for speaking out against the Ugandan government in general, the removal of the presidential age limit in particular. After being charged with “treason” and abducted by security forces in August 2018, he was apparently tortured in custody by members of the security apparatus and had to seek treatment in the USA.

Bobi Wine certainly poses a threat to the reign of Museveni. For how much longer will 74-year old President Museveni hold on to power? No one knows. Certainly not much longer when it comes to many of the country’s youth, who make up the largest part of Uganda’s population. But how can Uganda get rid of the new “Old Man of Africa” and how can it achieve political change for Uganda’s 40 million citizens?

The removal of Museveni from the Presidential Office would present a chance for young Ugandans wishing for political change and economic opportunities. It would open up the possibility of holding members of the Ugandan government and the security apparatus responsible for war crimes committed in the country’s Northern provinces. As it appears, international justice mechanisms so far have failed to charge or even investigate crimes committed by sitting members of governments.

With the General Election coming up in 2021, it seems difficult to predict if Museveni himself will be physically fit enough to run for the presidency again. But at the moment, possible successors (with the unlikely exception of Museveni’s son, Muhoozi) are not in sight — it seems that a lot depends on how the opposition will position itself in the next few years. If the opposition wants to win a democratic election in Uganda, they will have to give Museveni, his family and allies, plenty of assurances, as the new “Old Man of Africa” will certainly not leave with the looming prospect of spending the remaining years of his life in the courtrooms of Kampala or The Hague. Neither will the hundreds and thousands of people in political offices, the police and military, and Museveni’s business partners, all of whom benefited from Museveni’s everlasting reign.

Jasper studied Philosophy, Arts and Media Studies in both Hildesheim and Istanbul. He is currently a student of Msc. in Politics of Conflict, Rights and Justice at SOAS. Prior to SOAS, he spent two years working for an NGO in Kampala, Uganda View all posts by Jasper A. Kiepe