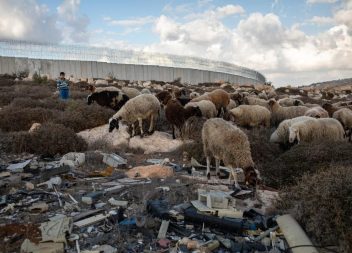 Israel is explicit about the objective of its supposedly sustainable projects: to achieve full sovereignty over “the lands of Judea and Samaria” by whatever means necessary, i.e. present-day Israel combined with its occupied Palestinian and Syrian territories. Let’s imagine this objective were to magically be achieved overnight: Israel would literally have a mountain of toxic waste on its hands.

Israel uses the West Bank as a dumping ground for its own waste and the waste from illegal settlements. Israel also systematically denies Palestinians in the West Bank and Gaza suitable access to resources and infrastructure for the responsible management of their own waste. This has led to the widespread adoption of unsafe waste disposal practices in the area. Israel is attempting to circumscribe both the Palestinian people and all of the waste in the region within its eight meter walls, and it will eventually fail on both counts. The ongoing imprisonment of the Palestinian people seems to thus entail the ongoing degredation of the lands by Israelis; both practices continue to harm their intended Palestinian victims as well as unintentionally backfiring on Israelis.

Let’s be clear– the occupation of Palestine is a war crime violating a seventy-three-year-long list of human rights; it is wholly inappropriate to compare the suffering of an Israeli to that of a Palestinian. In addition to our awareness about the myriad ways in which the Israeli occupation harms Palestinians, it is also important to pay attention to the ways that the occupation harms Israelis: when a bare foot in the grass crushes an unsuspecting bee, the bee is killed– but not before leaving a nasty sting.

Israel and Palestine are enmeshed in a relationship of coloniser- colonised “stuckedness” as explained by Ghassan Hage: they are bound to one another, destined to be doomed or flourish collectively. Hage states that no matter what, they are in fact “stuck with each other.” Building on this concept of stuckedness, the June 2020 UN report illustrates that Palestinians and Israelis are stuck with their collective toxic waste as much as with each other.

Achille Mbembe’s conceptualization of the “racist affects” of borderwork explains that the Israeli borderworkers are expected to inflict injury on the Palestinian ‘other.’ The omnipresence of “racists affects” within Israeli society have not only perpetuated the ongoing genocide of the Palestinians, but has also led to widespread trauma and chronic mental illness among the Israeli population of indentured soldiers. But there is a third loser in this war: the ‘sacred’ land on which it’s waged. Mbembe shows us that Israelis are encouraged to undertake unsustainable environmental practices (like the mass dumping of toxic waste) as one of many tools for inflicting harm on the Palestinians. These practices are backfiring: poisoning the neighbours’ garden harms yours too, especially when you’re actively stealing their land.

Two events last month encapsulate the hypocrisy of Israel’s greenwashing. Israeli PM Bennett was outspoken at COP26 about Israel’s green-tech ‘innovations’ and its self-declaration of ‘successfully’ having implemented the UN Sustainable Development Goals (SDG’s). Elsewhere, Israel’s Ambassador to the UN tore up the annual human rights report on the podium at the UN General Assembly. By using the global stage at COP26 to greenwash Israel’s inherently unsustainable practices, the international community itself is not just greenwashing but also gaslighting the continuation of Israel’s human rights violations and war crimes. Israel’s allegedly “successful” implementation of the SDG’s serves as an offensive cover-up for their policy of genocide and environmental degradation, and also as state approval for the continuation of unsafe practices like toxic waste disposal in the West Bank. These Israeli efforts to destroy Palestinian land are destroying all the lands for all those in its midst, and eventually the toxic waste will be the last one standing.