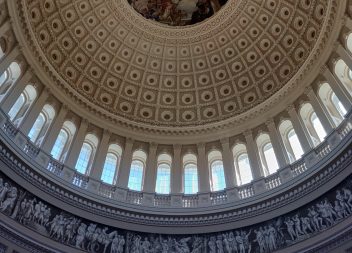 On 6 January 2021, 800 people stormed the Capitol building in Washington, D.C. So far, more than 135 people have been charged. Call it what you will – an insurrection, a riot, a terrorist attack, a failed coup or rather meekly, a protest – chants of ‘Stop the Steal’ from the pro-Trump mob (with clear linkages emerging among extremist groups such as the Proud Boys, Three Percenters and Oath Keepers) echo through live footage shared on Twitter of wrecked media equipment, FBI reports of pipe bombs, and Representative Alexandria Ocasio-Cortez’s recent account of lasting trauma. Passing more anti-terrorism laws will do very little to engage with the realities of white supremacy – issues at the heart of the United States’ founding that urgently demand proper recognition, reparations and work towards reconciliation.

These events have reignited calls among lawmakers for a more expansive means to address terrorism-related activities, including widening the targets of surveillance and creating a new category of crime, ‘domestic terrorism’. Signed declarations such as The Leadership Conference on Civil and Human Rights outline major concern with such demands, fearful of more anti-terrorism legislation exacerbating existing frameworks rooted in bias, discrimination and a denial of fundamental rights such as due process.

Highlighting the political and discriminatory choices within anti-terrorism programmes, Adama Bah shares her story of harassment as a Muslim post-9/11. Accused of being a potential suicide bomber in 2005, aged sixteen, “when I hear people say, ‘we need to expand the war on terror or create new laws’, it’s an insult to me because, for some reason, they found the laws to detain me and accuse me of terrorism”. Though released after six weeks in a juvenile centre, Adama was subject to a 10pm curfew, an ankle bracelet for three years, and put on a no-fly list in face of deportation to Guinea, where she had not lived since age two. Eventually granted asylum on grounds that she would face forcible circumcision if deported, Adama notes how “history shows that having anti-terrorism laws just affect people like myself”.

Although calls such as Speaker of the House Nancy Pelosi’s for a 9/11-like commission to examine the causes of the events on January 6th are a necessary start, the storming of the Capitol should not be treated as exceptional. Instead, these events reflecta storm brewing over the past four years and since the Civil War of 1861-65.

As columnist Fintan O’Toole puts it, the imagery of “rampaging savages desecrating the neo-Roman Capitol” serves a rather reassuring role in deflecting from the real issues at the heart of this debate. Unpacking the role of Trumpism in inciting the violent attack on the Capitol, O’Toole draws attention to its construction coinciding with the increasing contradictions faced by the Republican Party. Most poignantly, such imagery implies the deep-rooted racism of a few, while sustaining an illusion of a democratic, anti-racist majority. Whilst Trump may have brought together and helped brand a crowd of ‘great patriots’, this is nothing new.

Expanding state powers in a supposed effort to combat white supremacy inherently strengthens the very institutions that continue to harm minorities. Moreover, an event-driven reaction feeds into the storming of the Capitol as an exceptional moment in US democracy. Such processes serve to obscure, distract and deny the systemic racism at play, alongside the tragic inevitability of the violence and hatred shown on January 6th being repeated on a wider scale soon enough.

So what is an appropriate response? A national reckoning may seem intimidating and idealistic, yet much important work has already begun. It’s a matter of listening and engaging. All around Capitol Hill we are reminded of the realities on which the US was founded. The Capitol Building itself was constructed by enslaved African Americans. Further down the National Mall, The National Museum of African American History and Culture reminds us of the brutality endured by some and not others in the country’s founding. Drawing attention to the generational struggles that have come with a legacy of enslaved ancestors traded as property sheds powerful light on the multi-faceted traumas of African Americans over the past 400 years.

Neither do we have to look very far today to see how pain and violence persists among those structurally marginalised. The Colour of Coronavirus Project highlights, for example, how Indigenous Americans have suffered almost double the number of deaths of White Americans per 100,000. The US’s response to COVID-19 has exacerbated inequality among already vulnerable communities – what the Brookings Institution has referred to globally as the ‘Inequality Pandemic’.

The events on January 6th are thus more a question of whether the US is ready to engage with the deep contradictions at the heart of claims to be ‘the world’s greatest democracy’. First and foremost this should start with holding Trump and a long list of Republican Party members of Congress to account for their role in inciting violence. But we need to go much further. There needs to be an interrogation of how the storming of the Capitol was ‘allowed’ to happen, with necessary recognition that white supremacy is systemic and endemic. With political will, this crisis of white supremacy – amplified by the events on January 6th – provides a vital opportunity for lawmakers to take an active role in prioritising education, dialogue and national introspection.

Photo credits: from the author.