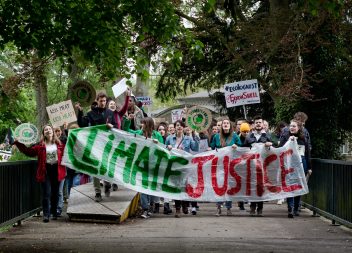 “Eco-terrorists  and animal rights extremists are one of the most serious domestic terrorism threats in the U.S. today”. These words are found in a 2008 FBI report on environmental extremism. Specifically, groups such as the Animal Liberation Front (ALF) and the Earth Liberation Front (ELF) were identified as the main culprits in a new kind of domestic terrorism: eco-terrorism.

‘Eco-terrorism’ has been conceptualised as acts of violence carried out with the intent to disrupt or prevent activities considered harmful to the environment. The ALF, ELF and various small and loosely organised environmentalist groups were responsible for a string of arson attacks in the late 1990s and early 2000s. Today, the perceived threat from environmental extremists is once again occupying the minds of those in power.

How is it that these so-called ‘terrorists’ came to be thought of as one of the most serious domestic threats in the US, given that to this day these groups have never killed anyone? Homeland security agencies in the US and Europe were immensely concerned with any potential threats after 9/11 and saw these arson attacks as the beginning of a broader and far deadlier eco-terrorism campaign. The term ‘green scare’ was coined by environmentalist groups to describe this hysteria over eco-warriors. The phrase was used to draw a parallel with the ‘red scare’ of the 1950s in which the threat of communist infiltration was radically exaggerated and led to mass arrests. During this green scare, dozens of ALF/ELF members were arrested, and millions of dollars were spent on surveillance and prosecution. Eventually, these ‘eco-terrorists’ faded from the headlines, the attacks on property decreased, and homeland security agencies turned their attention elsewhere.

But there has been renewed focus on these ‘eco-terrorists’. In 2018 a new group grabbed the headlines in the UK for their use of disruptive and headline-grabbing protest tactics: Extinction Rebellion (XR). XR and Youth Strike for Climate protests sprang up across the country, demanding that the climate crisis be taken seriously by those in power. This rattled the UK government. In 2020, the British counter-terrorism police branded XR as “an extremist ideology”. For a short time official police counter-terrorism documents listed XR next to neo-Nazi organisations such as the National Front. Addressing a police conference in September 2020, Home Secretary Priti Patel claimed that “XR poses a threat to the UK’s way of life”. Such rhetoric is redolent of the language used to discuss groups such as al-Qaeda, Islamic State or George Bush’s ‘Axis of Evil’. The British government is clearly interested in framing XR and other environmentalist organisations as ideological extremists with the capacity for violence. But is this accurate? Is there a genuine possibility that the new terrorist threat will be from eco-terrorism?

In reality, environmentalism has been mainstreamed. The Youth Strike for Climate are mostly children, and while XR’s tactics are disruptive the average XR activist is hardly radical in their approach to environmentalism. In fact, XR has expended considerable energy in “depoliticising” environmentalism, by rejecting ideology, and framing the climate crisis as something “beyond politics”.

It’s true that recently there has been something of a ‘call to arms’ for environmentalists to escalate their tactics. In his recent book How to Blow up a Pipeline, Andreas Malm believes now is the time to do precisely what his book title implies; turn to violence – specifically the destruction of private property. However, scholars working on extremism broadly agree that causing bodily harm or murder is fundamentally at odds with the ethics of environmentalism and that we’re unlikely to see this change in approach.

It’s impossible to know what the future holds for environmental activism. Perhaps the violent elements of the environmentalist movement will remain on the fringe. Perhaps as the climate crisis becomes more desperate, so too will the tactics of those seeking to defend the natural world. For now, the ‘eco-terrorist’ remains a myth which authorities around the world deliberately propagate to avoid responding systematically to the climate crisis.