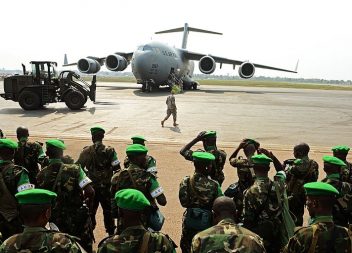 Decades of peace operations in the Central African Republic have done little to attenuate violence.The persistent failure of the state (and its external agents, like peacekeepers) has embedded a culture of impunity in CAR, in which carrying a weapon necessarily emboldens subjects and constitutes sovereigns.

In CAR, the fluidity between the protection of civilians and violence against them by peacekeepers transforms local insecurity into an internationalized and mobile state of exception. The concomitant political teleology is, simply put, terror. Violence perpetrated by peacekeepers—as subjects of legitimized violence in armed conflict—is mobilized as a relational construct in the context of civil war in CAR.

The embedded praxis of terror perpetrated by non-state sovereignties and its implications for reconciling the lived experience of violence by Central Africans suggest a central question: why doesn’t the international community consider crimes against humanity and war crimes perpetrated by peacekeepers to be terrorism?

Civil War and the MISCA Massacre

Séléka CPSK-CPJP-UFDR—a coalition comprised of political parties and armed militias—successfully deposed former CAR President Bozizé in a brief, but bloody coup in March of 2012. He was replaced by President Djotodia, who was seated in office after he led Séléka during its campaign for political control.

Facing significant international pressure, Djotodia dissolved the alliance. But Ex-Séléka militants soon mobilized outside Bangui, targeting civilians, particularly those suspected of supporting Bozizé, with brutal violence. In self-defense, civilians armed themselves and formed anti-Balaka militias targeting suspected Séléka supporters. This act was a necessity driven by the virtually non-existent state apparatus left behind from decades of violent politics at the center reverberating through peripheral communities in crisis.

On 24 March 2014, anti-Balaka militias—at the direction of commander Maurice Konomo, who told his troops to “go to war”—attacked MISCA soldiers in Boali (a town 100 kilometers north of the capital, Bangui), resulting in the death of one MISCA peacekeeper. Afterwards, 20 MISCA peacekeepers, all from Congo-Brazzaville, marched to Konomo’s home where they killed a young boy. With the knowledge of MISCA Captain Abena, they detained and executed 12 other civilians, including 4 women and 2 children, before burying their bodies only 500 meters away from the MISCA base.

The AU publicly condemned the murder of their peacekeeper, and claimed that MISCA troops had “returned fire” against anti-Balaka militias who had identified themselves as “spoilers and enemies of peace.” The MISCA massacre was a profound violation of their mandate to protect the basic human rights of Central Africans. The choice to blame MISCA victims exposes a much deeper problem in how peacekeepers use violence to keep the peace, though ultimately undermine it.

The State of Exception

The interaction between identity and agency is a critical analytic tool to explore the legibility of exceptional violence. Charles Tilly provides two analytic modalities in which to situate terrorizing in the larger project of waging war. First, terror is defined as acts of violence used in a “recurrent strategy of intimidation” that are perceived as terrorizing. Second, terror is measured by the presence of coercive specialists who “deploy terror under certain political circumstances, usually with far more devastating effects than the terror operations of nonspecialists” (2004, 9).

Terror is thus a fluid asymmetry of power, in which to be subject is to perform violence, either in fact or in effect. Deploying identity, indeed weaponizing it through terror, blurs the line between what (who) is subject and what (who) is sovereign. Described by Achille Mbembé as an internalized constituency, the subject becomes sovereign in the exercise of public violence, embedded in the “state of injury” (2003, 21). Notions of the enemy, and an intervenor, weaponize innocence against guilt such that the inherently innocent peacekeeper intervenes on behalf of the only circumstantially innocent civilian. Acts of terror thus become constitutive instruments producing a state of exception. Such exception (re)produces identities trapped at the intersection of violence and vulnerability, no longer dependent upon clearly delineated time or space, but in the ephemera of insecurity.

Evidence of the MISCA massacre—and proof of an act of terror—was literally uncovered when the mass grave was exhumed in February 2016. Abena was temporarily suspended in 2014 after accusations of the murders were publicized, but was later reassigned to another part of the CAR. The resulting logic—that peacekeepers are entitled with the privilege to treat a massive violation as a professional indiscretion—illuminates the role of silence and erasure in the making of civilians into objects, or instruments, of violence.

The brutal and cruel response to an aberrant act of violence reoriented the performance of dominating the periphery; in a sovereign and subject performance of retaliation, trained and militarized subjects deployed violence for the purpose of intimidation. Terror permeated the politics of everyday life, firmly establishing the peacekeeper as the sovereign subject with a legitimated monopoly of violence. When the United Nation’s Mission Multidimensionnelle Intégrée des Nations Unies pour la Stabilisation en Centrafrique (MINUSCA) formally subsumed MISCA in 2015, the UN launched investigations concluding that MISCA was in fact responsible for perpetrating crimes against humanity and war crimes.

Peacekeepers are entitled to protections as international agents of peace, but simultaneously enjoy the privileges of a traditionally armed military force. Obliged to the consent of the state in which parties are warring, rather than the warring parties themselves, peacekeepers are thus simultaneously combatants, who eschew international humanitarian laws regarding rules and responsibilities to civilians, and as civilians, intermittently engaging in hostilities, who deploy terror in discrete political circumstances. This effectively produces a state of exception which becomes a mobile instrument of sovereignty, a superstructure of peacekeeping through terror and governing through violence. The terror of being targeted by forces present in a community for the purpose of protecting that community is compounded by the impunity when those crimes are investigated and unpunished.[1]

Rethinking the Role of Violence in Keeping the Peace

Subjectivity and sovereignty are reinforcing logics: the state needs a subject over which it can exert authority. Such moments of violence as the MISCA massacre, expose a key paradox in the CAR: the structural durability of exception in categorizing all violence by non-state actors as legitimate and necessary. As peacekeepers define what peace means, they also claim ownership of exception to act violently in the name of peace. These acts of violence embed a framework of terror as a mechanism of creating a subject who might be blamed. Inevitably escalating violence, events like the MISCA massacre create a singular social structure in which violence, brutal and spectacular in form, is the most effective and efficient way that civilians might reclaim their agency and identity.

Terror, as an act and as an embodied experience, sits at the intersection of exception and injury: it causes irreparable damage to the relationship between the peacekeeper and civilian and in doing so, produces conditions of fear and insecurity which necessitate exceptional acts of violence. Thus, terror saturates social politics so completely that exception and injury become mobile. Where peacekeepers inhabit a malleable and transient state of exception, they are both the makers and the arbiters of the rule of law, to police and enforce a power arrangement dependent upon their flexibility in wielding and articulating their own powers.

As the dynamic of violence shifts, so too does the articulation of exception, isolating culpability for an act of violence from is victim, who remains static. As a result, civilians inhabit a similarly mobile state of injury, where they must accept victimization as a demonstration of their status as civilians and be resilience in response to terror.

The MISCA massacre further illuminates the interstitiality of the Central African civilian constrained by the politics of terror in which they are the vilified subject of an act of terror as much as the victimized object of it. By situating peacekeepers outside a good/evil binary, this analysis exposes the lacunae of terror. Such external agents of the Central African government in Bangui instrumentalize the existence and destruction of civilian bodies as proof of someone else’s wrongdoing. Persistent social and political insecurity at the periphery, which produces conditions that allow peacekeepers to claim a state of exception, also allows them to disjoin it from those same civilians. Blame is necessarily redirected to local actors, including civilians, for the conditions of insecurity and violence which require the suspension of the ordinary protections and privileges of being a civilian.

It is therefore in the asymmetric superstructure of blame that exception becomes a portable performance of legitimacy. The MISCA massacre is terror precisely because MISCA reacted so violently that they deployed a state of exception, yet peacekeepers’ sovereignty and performative subjectivity persist through their mobility.

[1]  Three of the peacekeepers involved in this incident, Abena, Ngouala, and Ntalani Bantsimba, were convicted of war crimes in the DRC and sentenced to three years in prison in July 2018. The Congolese chamber did not seek testimony from any Central African witnesses during the judicial process, neither the victims’ families nor witnesses were included in the proceedings. All three men were released in 2018 having served a portion of the sentence before being convicted. See coverage by Human Rights Watch for additional analysis.

Megan Manion is reading for an MSc in the Politics of Conflict, Rights and Justice. She is one of the founding members of (Re)imagining Peace + Justice and currently serves as the site’s co-Editor-in-Chief. View all posts by Megan Manion