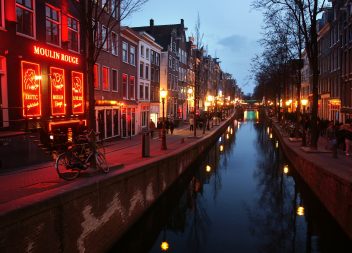 The day to day life of a sex worker is not only exhausting, but comes with its own dangers. These individuals put their bodies on the line day in and out just to make ends meet. The UK has no problem with that. Prostitution, as many know, is legal in this country. Yet a place for sex workers to conduct their business, such as a brothel, is not legal. Why?

The push for sex work to be normalized has ensued for years, many saying that it contributes to the economy and is a sound choice made by the individual worker. The UK seems to agree, as the consensual exchange of money between adults for the purchase of sex is legal. The UK has implemented several laws making it almost impossible to continue this kind of work. This includes prohibiting prostitution for personal gain or pimping someone out, soliciting sex in the street, and causing a nuisance to citizens in the form of advertisement. The UK has made these practices surrounding sex work and brothels illegal. So, why is sex work legal at all when workers can barely find ways to conduct their business without breaking some other law?

Some progress has been made in the field of sex workers’ rights. In 2016, a group of Members of Parliament called for the soliciting of sex workers to be decriminalized. Due to the illegalization of soliciting and having three or more sex workers together being considered a brothel, many sex workers are forced to work in isolation and away from areas protected by police. Many are subsequently fearful for their safety, yet must continue to work in such conditions. The call for decriminalizing soliciting came as a result of an increase in sex workers killed during the past decade. While it would be expected that the population of a state that does not allow brothels must make it unlawful in an attempt to please public protests of sex work, a report from RightsInfo showed that nearly 50% of British people surveyed were in favor of legalizing brothels in the UK.

While some question whether brothels will bring real improvements to the rights of sex workers and their clients, comparisons to countries like Germany, the United States, and Switzerland – where sex work is taxed – show clear benefits. Germany has even passed the Prostitutes Protection Act which requires permits and certificates for all those engaged in prostitution, and even permits sex workers to be recruited through HR companies.

In the United States, the state of Nevada allows prostitution, under regulation, as well as brothels, which are subjected to paying federal income tax. The brothel industry in Nevada also charges almost three times that of the average sex worker, although many clients and sex workers agree that the safety that comes with such establishments is worth the amount spent. These brothels also conduct health checks on their workers, which brings an extra level of security.

Switzerland is by far one of the most progressive nations in its legalization of sex work. In Zurich, sex work is an open profession, practiced in a location designed specifically for the work that comes with the job. The city spent £1.5 million in building what are known as “sex boxes” for sex workers and their clients to meet. These “boxes” are set-up as one room buildings lined consecutively, drive-thru style, and have space for smaller types of vehicles including cars and motorcycles. The government also allocated money specifically for security enforcement at these locations and social services provided to its workers. This initiative was supported by half the city’s voting population with the intention of preventing harm against sex workers and human trafficking. Zurich is an example of a community which recognized the unsafe climate surrounding sex work on the streets and put in place an alternative that not only profits the workers, but adds to a thriving economy for the city.

Sex work is just like any other business. Its profit margins surpass that of the average market shop. In the early part of 2019, one of the UK’s larger brothels shut down, The Libra Club, was found to have made around $7 million over a five year period. That speaks volumes. As workers of the UK who contribute to the nation’s economy and engage in daily business, sex workers also have workers’ rights according to UK law. Conducting that work has to be done in a specific way to avoid illegality, but it is in fact work condoned by the state. Therefore, sex workers’ safety is, by law, a responsibility of the state as a self-employed person. If the UK were to legalize brothels, the responsibility to protect sex workers would then fall on its employer and can be regulated as such.

Prostitution is economically beneficial, but for many sex is unattainable according to UK law, making it much more difficult for sex workers to conduct such business legally while putting them in harm’s way. These laws are discriminatory in applying only to individuals in this profession, who typically earn low incomes. While the UK has only begun the process of fully legalizing sex work, the next step is allowing brothels. In doing so, the UK government can ensure sex workers’ safety and establish thriving businesses that continue adding to the UK economy.

Devan Ogburn is currently reading for the Msc. in the Politics of Conflict, Rights, and Justice at SOAS. She is originally from Washington DC, where she completed a bachelor’s degree in International Relations at American University with minors in Literature and African American and African Diaspora Studies. View all posts by Devan Ogburn