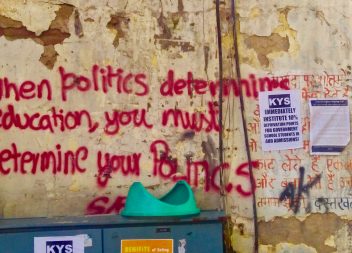 2014 was a turning point for India. The year marked Prime Minister Narendra Modi’s election victory. The BJP government not only won, but also dominated the election by winning with a majority–the first of this kind of majority in twenty years. Though the election was won on the promises of development, the creation of different employment opportunities, and agricultural reforms, the BJP-led government has failed at keeping these promises.

Instead of the creation of a better society, the country has witnessed a rise in intolerance towards minorities, increased violence, and suppression of any form of dissent against the party in power. Furthermore, the conflict within Kashmir has further deteriorated under Modi’s rule, with an increase in civilian as well as military officials’ deaths.

In Modi’s India, questioning the state has led to online trolling, arrests, and even killings of those who dare to publicly voice their dissent against the government. The Bhima Koregoan commemoration emphasizes the silencing of dissent and violence in Modi’s India and demonstrates why the Modi government is a threat to the diversity and democracy in India.

In order to shed light on the recent atrocities being committed by the government, the SOAS India Society organized an panel titled, ‘Violence and Dissent in Modi’s India,’ to discuss the violence surrounding the Bhima Koregoan case. On New Year’s Eve, 2017, thousands of lower-caste Hindus–who are known as Dalits–gathered at the Bhima Koregoan war memorial to commemorate the 200th anniversary of the Anglo-Maratha war.

The commemoration is significant; it was organized to pay respects to the fighters of the Mahar regiment who fought against the upper-caste regiment and won the battle. Though the commemoration was a peaceful celebration, it soon turned violent when the attendees were attacked by upper-caste Maratha groups. Following the violence, instead of the arrests of those who incited the violence, local police arrested various activists and attendees.

Though the violence was only perpetrated against harmless attendees, it was followed by nation-wide harassment and the arrests of scholars and activists who publicly spoke against the crushing of dissent and curbing of freedom of speech in Modi’s India.

The panel at Violence and Dissent in Modi’s India consisted of three panellists who explored on the violence surrounding the Bhima Koregoan case. The first speaker, Dr Mayur Suresh, is a lecturer in Law at SOAS, University of London. Due to his law background, Dr Suresh focused on the law under which those arrested in the Bhima Koregaon case were charged by the police: the Unlawful Activities (Prevention) Act (UAPA). Put into effect following the second emergency period in India (1967), UAPA was enacted as a response to two separatist campaigns.

A recent amendment was made to the law in 2002, which expanded UAPA to include POTA (Prevention of Terrorism Act). Hence, with the introduction of this act, the events of Bhima Koregaon or lower-caste assertion were being linked to terrorism. This is evident as the first information report (FIR) filed by the upper-caste Maratha group,s who attacked the attendees of the Bhima Koregoan commemoration event, emphasized the violence as a response to the speeches being made at the event.

The law is highly problematic as it enables the state to arrest the accused for a time period of six months of longer without providing the accused with the relevant information about the charges for which they are being convicted.

Furthermore, arrestees cannot attain the granting of bail. Not only does this law act as a threat to freedom of speech, it also enables the state to practice draconian laws and arrest any individual they view as a threat without substantial evidence. Dr Suresh highlighted how the law is a key tool used by the state to curb dissent.

The second speaker, advocate Susan Abraham, is a lawyer and human rights activist. She emphasizes how the violence that was unleashed on the attendees on 1 January led to a greater movement of people from the Dalit community, who came together for a state-wide strike in protest of the violence perpetrated by Hindutva groups. No action was taken, nor was any judgement passed in January.

Following the violence that occurred during the Bhima Koregoan commemoration, months later on 6June, the government of Maharashtra issued the arrests of prominent scholars and activists related to the Bhima Koregaon commemoration violence, including Rona Wilson, Sudhir Dhawale, Mahesh Raut, Surendra Gadling, and Shoma Sen. They were arrested, with terrorism related charges, under UAPA five months after the event. In addition to the brutality unleashed by the state by imposing this law, the five individuals were arrested on the premise that they were plotting collectively to assassinate Prime Minister Modi. During the arrests, not only were they assaulted by the police, but their laptops and documents were seized.

Despite wide-scale protests domestically and on an international level, the government refused to allow bail for the activists involved and declared war on “urban naxals.” This term is used to label those who dissent against the government in power and the enemies within India who “act as a threat to the integrity and unity of the country.” Following a second round of arrests and raids by the police, on 28 August 2018, Dr. Abraham’s own house was raided by the authorities and her husband Vernon Gonsalves was arrested.

The third speaker, Professor Romila Thapar, is a renowned historian and professor at Jawaharlal Nehru University (JNU) in New Delhi. In a recorded video, Professor Thapar emphasized the role of government in changing the content of school textbooks in order to glorify the role of Hindus in Indian history. In history textbooks across Maharashtra and Rajasthan, the role of Mughals and Muslim rulers is being erased and replaced with the accomplishments of Hindu Maratha and Rajput rulers.

She stressed the silencing of dissent with a clear focus on university campuses, noting how dissent is met with violence. She highlighted how fear is being spread specifically within universities by Hindutva forces, who perpetrate violence with impunity.

Professor Thapar’s contribution is important as it highlights how the education sector is being widely targeted by the Modi government to suit their interests and to magnify the role of Hindus. This deliberate rewriting of history according to the interests of the ruling party is a threat to the learning process of students who are forced to learn a distorted version of history.

The election of Narendra Modi has not only led to an increase in hate crimes against minorities and lower-caste Hindus, but also in the legitimization of violence without any repercussions. Dr Suresh, Advocate Abraham, and Professor Thapar provide different reasoning for why the Modi government is a threat to the unity of the country. Laws such as UAPA, arrests of activists for voicing their dissent, and the changing of school textbooks are systematically employed by the Modi government to crush dissent.  The violence at the Bhima Koregaon commemoration is a clear example of the rise of the Hindutva groups and the rise of politics of repression in all forms, ranging from the public sphere to even a private declaration of dissent against the state. Minority groups, students, scholars, and activists are under a clear threat.

The attacks on university campuses and changing of school textbooks are a clear reflection of this. Any form of dissent is met with abuse, arrests and even deaths of those who publicly oppose the government in power. The curbing of dissent has taken various forms and the application of laws, such as UAPA, which entails a form of institutionalized discrimination and violence.

Hence, the targeting of minorities and suppression of dissent isn’t just a threat to the well-being of the citizens of India, but also a threat to our constitution, which allows all citizens of India with the right to question authority, dissent, and requires tolerance of the diverse groups living in our nation.

The four pillars of democracy–the Executive, Judiciary, Legislature, and Media–are constantly being used by the government to silence any form of dissent. Not only has the Prime Minister failed to fulfill the promises on the basis of which he was elected in 2014, but his government has become the root cause of the growing intolerance and rise in communal violence across India.

Unfortunately, in Modi’s India, being critical of the Prime Minister is conflated with being an enemy of India. Therefore, in light of the escalating tensions with Pakistan, the conflict in Kashmir and the upcoming Lok Sabha elections, it is important now more than ever to come together as a secular and democratic nation to fight against intolerance, hate, and prejudices, collectively. The upcoming elections are the only chance for the citizens of India to come together and use the power of the ballot to vote this hateful, intolerant, and fascist government out of power and save our democracy.

1. Shantha, Sukanya. (2018), ‘The People’s Fighters: Meet the Five Arrested in the Bhima Koregoan Case’. The Wire. Available from: https://thewire.in/caste/meet-the-five-arrested-in-the-bhima-koregaon-case

2. Torgalkaer, Varsha. (2018), ‘One Killed in Clashes at Bhima Koregoan Battle Anniversary Event in Pune; Situation Tense in Maharashtra’. The Wire. Available from: https://thewire.in/caste/one-killed-clashes-bhima-koregaon-battle-anniversary-event-pune