In 2018, the targeted killing and imprisonment of journalists reached its global peak in 10 years. From repression by autocratic regimes to assassinations linked to organized crime, journalists have faced untold risks as they attempt to report the truth. Nowhere is this more apparent than in the Syrian Civil War, in which a reported 126 journalists, both local and international, have been killed attempting to report on the conflict.

Under the Wire brings home the real, human cost to journalists taking these risks, while also forcing the audience to once again to draw our eyes to the humanitarian catastrophe that is the Syrian Civil War. The film succeeds by showing the realities of reporting on conflict zones without romanticizing them, all while emphasizing the necessity of the work journalists do to tell the stories of the people most affected by conflict.

Under the Wire is first and foremost a personal story. It memorializes the legendary war journalist Marie Colvin, whose life was recently featured in the separate 2018 biographical drama A Private War. Centering on her working relationship and friendship with British photographer Paul Conroy, the film covers approximately two weeks that Colvin was reporting from Homs in 2012, during the assault by government forces on the rebel-held neighborhood of Baba Amr. It was an assignment that would cost Marie Colvin and French journalist Rémi Ochlik their lives in a targeted shelling attack, in what recently was decided in U.S. courts to be an “extrajudicial killing” directed by the Syrian government  — the first time that Assad regime has been held directly accountable in courts for a war crime.

While Colvin’s bravery, commitment to the truth, and impact on the lives of journalists such as Paul Conroy shines through the film, the documentary succeeds most when it focuses on the Syrian people themselves. It does so by showing the children who die for lack of medical equipment, the images of bereaved families within the “Widow’s Basement” huddle against the shelling of the Syrian army, and the kindness and selflessness of Syrians such as translator Wa’el and Dr. Mohammed Mohammed, who put their lives on the line to save the lives of Western journalists whom they barely knew. By forcing the audience to once again realize the humanity of the victims of the conflict, the film reframes the Syrian War once more as a fundamentally humanitarian catastrophe, in which the people who are most affected by the war are not faceless victims and refugees but are individuals who possess their own humanity and dignity.

There is great humanity in this film. It does credit to Conroy and the Under the Wire film team’s declared goal: to show the world the story of the Syrian people. By the end of Under the Wire, the audience is left with little doubt as to the courage of journalists such as Marie Colvin, or the necessity of risking danger—and ultimately their lives—to show the world what has occurred. But after eight years of ongoing conflict, and eight years of courageous reporting by Western and local journalists alike, the world has no choice but to acknowledge what is happening on in Syria. Yet the war continues.

For the audience of Under the Wire, this is the truth with which we must grapple. The work that Marie Colvin, and others like her, did and continue to do rests on the commitment of the rest of the world—governments and the public alike—to take action to end the continuation of the atrocities that have been shown to us by journalists such as Marie Colvin and Paul Conroy. There are great perils to reporting on conflict, but the greater peril is when we see the images and stories presented to us—and decide to look away. 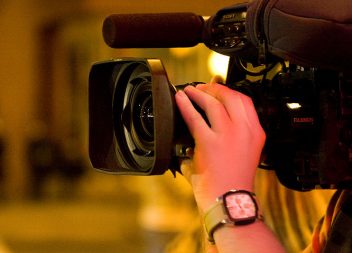 The recent attack on a hotel in Nairobi, during which at least 21 people were killed, sparked condolences and solidarity messages from all over the world. The way the attack in Nairobi was presented in international media and in social networks, however, led to an uproar, after The New York Times and other media outlets issued horrifyingly detailed images of the corpses of some of the victims in what appeared to be a hotel bar or restaurant.

The New York Times article, as George Ogola argued for The Conversation, encompasses a whole range of elements to be criticised, particularly the potential utilisation of media outlets as a tool of propaganda by terrorist groups, as recently taken to a new level of professionalism by the so-called “Islamic State” (ISIS)-affiliated news agency, Amaq. Other elements of Ogola’s more than justified critique include the problematic differences in coverage of “distant death,” as well as the sensationalization of violence in Western media, particularly when it comes to the reporting of war and terrorism from “African” countries and the urge to glorify the white man as the rescuing hero.

This practice might be linked to a number of factors including, but not limited to, the fundamentally racist picture of “bloodthirsty Africans” savagely genociding each other, the false assumption that African conflicts are irrational and not driven by political and economic factors (as in any other conflict), and the antiquated, if not irrational, belief that the entire African continent is a such a far-off place that it lacks connection to the Western media, to the extent that relatives and friends of the victims are assumed to never see the pictures of their slaughtered family, because they are incapable of accessing the internet to read the New York Times.

The irony is painful; the racist element is obvious. In this situation, where were the guidelines that media outlets (such as the BBC) usually use to ensure the protection of witnesses and their relatives? But the debate surrounding the realms of media and photography ethics is not an entirely new one. Various debates in the field of media ethics, particularly the ethics of war and crime photography, include discussions on the appropriateness of exposing an audience to bloodshed (and the consequences that this may have, including desensitising the audience to human suffering); the protection of the victim’s identity as contrasting with the importance of reporting on atrocities; and the responsibility of the photographer to intervene (for example, the discussions surrounding what the photographer Kevin Carter could have done to help the “Starving Child” after taking the now infamous photograph).

But how should we, the audience, deal with the depicted death in the media? In “Regarding the Pain of Others,” Susan Sontag describes this “we” as those who can never truly understand the experiences depicted in coverage of violence: “We don’t get it. We truly can’t imagine what it was like. We can’t imagine how dreadful, how terrifying war is; and how normal it becomes. Can’t understand, can’t imagine. That’s what every soldier, and every journalist and aid worker and independent observer who has put in time under fire, and had the luck to elude the death that struck down others nearby, stubbornly feels. And they are right.” (2003).

With this in mind, a more understated representation of violence might help open a new space for the deliberate re-creation of media ethics in regard to what is depicted in the violent image, and the voyeurism one might develop when very much “regarding the pain of others” through mass media, particularly the internet. For us, as the audience, we do not need the gruesome picture of the shopping mall to understand what happened there. Looking at a picture of tragedy might shock someone for a second, at best, before as Sontag would say, “the book is closed,” and they move on. The images of violence are just too many, and thus are unable touch our empathy anymore. No longer do graphic images of suffering change the world, as did the image of a fleeing, burning child contribute to mobilising mass demonstrations in opposition to one of the most brutal wars in history.

Media outlets should begin realise that the momentum of violent photography is lost, and adapt accordingly. Editors can can make a decision: the freedom of the press includes the freedom to decide how to publish, but it also gives the freedom of what is better not to be published — including the images of the Nairobi Hotel Attack.