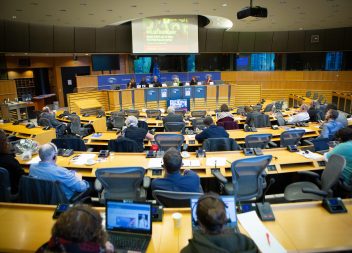 For decades, women have fought the hierarchy that characterises patriarchy. While obedience has been challenged in more or less overt ways, resistance to the patriarchal structures of society has been underway for a long time. And while patriarchal structures seem to characterise most of the modern world, things have not always been this ugly. Looking back, we can see examples of non-patriarchal societies, for example in pre-colonial Asia and Africa, which were destroyed by Western colonial powers. While some changes have been witnessed in the past few decades in the patriarchal structures that dominant our world, there are still important steps to be taken towards a more inclusive participation in matters of politics, peace, conflict and security.

Since 2000, when the Beijing Conference led to the adoption of the United Nations Security Council Resolution 1325 – the first resolution recognising the impact of armed conflict on women and girls and the need for their equal participation in matters or peace and security – there has been an active concern over the inclusion of women and gender mainstreaming in matters of peace, conflict and security. As UN Women Executive Director Phumzile Mlambo-Ngcuka recently warned, however, there is a clear need for women to hold much greater political power: “On the current trajectory, we won’t see gender parity in the highest office before 2150”. Clearly, we are still behind the curve in more ways that I would like to admit, because admitting them always leaves a bitter taste of injustice and frustration. But I have learned that injustice is also the taste of activism and proactivity towards a better, more equal and inclusive world. It is the motor that keeps us going. That is why women have sat at tables they were not invited to, bringing their chair along in case there was none to spare. This recently happened in Liberia, where women’s role in the peace process was considered vital to its successful outcome.

So, while Resolution 1325 has advocated for women’s role in conflict management and resolution, as well as in creating sustainable peace, and has seen some improvement, most women’s participation in these fields is insufficient and dominated by patriarchal structures.

In addition, patriarchy is entrenched in notions of ‘security’, which perpetuate the belief that possessing weapons, including nuclear weapons – through the “logic” of deterrence – is necessary for a safer world. When we reflect on the deterrence idea of security, we do not witness human-centered security but rather state-centred security, where the defense of state sovereignty is prioritised. Therefore, the public is led to believe that nuclear weapons are a way of keeping ourselves/the state (the blurring of the two is deliberate) “safe”, a belief that has been created and perpetuated by the patriarchal military culture. When we ask who makes decisions on matters of security, the answer is invariably white males, excluding the vital perspectives of women, gender-non-conforming people, children, populations from the Global South, indigenous communities and minority groups.

We – all of us outside of the male dominated room- have been affected by violence, war and conflict in many ways. Only recently, with the arrival of the Treaty on the Prohibition of Nuclear Weapons (TPNW) – the culmination of years of hard work by civil society, activists and feminists – have our perspectives and experiences been accounted for and victim’s sufferings acknowledged as worthy of rehabilitation and age- and gender-sensitive assistance. The treaty, which counters the realist conception of security, centres on the human being most affected by the disastrous use of nuclear weapons.

However, our logic that security is a world free of weapons is routinely considered irrational, futile, unworthy. The dismissal of the perspectives of everyone else has been a tool for the perpetuity of the patriarchal system. However, the 122 countries that adopted the treaty in 2017 think differently. 122 countries believe that nuclear weapons are not necessary to guarantee security and that there is a much more secure path to pursue, namely disarmament.

A study conducted by the United Nations Institute for Disarmament Research in 2019 found that the number of women participating in arms control, non-proliferation and disarmament diplomacy has grown steadily over the last four decades, with a higher number of First Committee resolutions advocating for equal inclusion of gender perspectives. However, women remain underrepresented, especially at the level of the First Committee on International Security and Disarmament, where women’s representation is the lowest. Positions of higher leadership, such as heads of delegations, are almost always male, especially when countries send only one representative.

While inclusive gender perspectives and the goal of reaching nuclear disarmament is embedded in the TPNW and gender mainstreaming is growing in disarmament affairs, there are still obstacles. There are still countries that refuse to accept the possibility of a different world. And it is there that they have failed monstrously. Because they fail not only to accept the possibility of another world, but even to actually open their eyes to see that it already exists – a world that is growing, flourishing, moving, strong and soft. While they continue, eyes wide shut, to imagine the veracity of their logic of deterrence, they fail to see the same logic crumbling around them.

Until they recognise that crumbling reality, we will continue to smash the ideology and hierarchical categories – as Ray Acheson would put it- they have used to perpetuate their seat at the table.

We will continue to dismantle the master’s house.