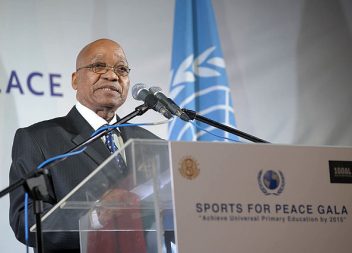 South Africa’s ‘Rainbow nation’, defined by its generational struggle for racial equality, has one of the  highest inequality rates in the world.  South Africa is unfortunately a country in which violence and state dysfunction continues to grow, and over many years these conditions have produced imminent mass unrest.

Jacob Zuma has been described as both a tyrant and a saviour, but his supporters and detractors agree on one thing: he is a political survivor. Since apartheid, South Africa has done everything it could to move on from its turbulent and violent past, presenting an example of viable, if not successful, political transition. Leading that process in 1994 was the former president Nelson Mandela and his party the ANC. More than twenty years later, the ANC remains in power, currently on its fifth consecutive election victory, led by their second term President, Jacob Zuma. However, during this election cycle, South Africa was confronted with a governance crisis and a stagnating economy, with Zuma at the centre of it all.

Although Zuma is known to have been involved in corruption in the past, including money laundering and racketeering stemming from a $2.5 billion (£1.98bn) in 1999, as well as accusations of raping a family friend in 2005 (albeit acquitted a year later), harming the reputation of the ANC and himself, it is his current activities which have done serious damage to South Africa to which his corruption nonetheless translates today.

It was not the poverty, violence in the streets or rising unemployment that triggered the worst unrest in South Africa since the end of apartheid. Rather, it was the imprisonment of Jacob Zuma on July 7th, 2021 that unleashed mayhem in South Africa’s two most popular provinces, Gauteng and Zuma’s hometown, KwaZulu-Natal. Lootings, violence, and the burning of vehicles, buildings and shopping centres, has left over one billion rand worth of damage and destruction. Protests, clashes with the police, vigilante attacks and stampedes have killed more than 330 people and the army, 25,000 South African National Defense Force soldiers being deployed by South Africa’s current President, Cyril Ramaphosa, to quell the violence to afflicted areas, the largest deployment of troops since the advent of democracy in 1994.

Reports suggest that attacks on the streets were part of an effort to sabotage the economy, and destabilise South Africa’s democracy, raising a bigger question: were the riots politically motivated action taken by defenders of  Zuma? As Ramaphosa has said, “…the events of the past week were nothing less than a deliberate, coordinated and well-planned attack…”. Alternatively, the riots may have been the expression of outrage at insufficient punishments imposed on Zuma.

On the 29th of June, the constitutional court issued a fifteen-month prison sentence to Zuma for failing to provide evidence of his innocence to numerous corruption scandals during his presidency. To which, many of those scandals are closely related to the two brothers Atul, Ajay and Rajesh Gupta who own one of the largest enterprises in Johannesburg, Oakbay Investments Ltd – which range from mining to real-estate to news and media. Their relationship with Zuma has caused issues over the years and is without doubt, complicated. Reports suggest that the relationship between the Gupta brothers and Zuma was more business than personal; Zuma would finance them with state funds in exchange for positive representation through Gupta’s media outlets. Therefore, anything close to the truth would be kept hidden and the world would be none-the-wiser until it’s too late.

However, systemic economic corruption has always been a concern for South Africa particularly among politicians and businessmen, fat-cats, who draw their wealth from state funds, whilst neglecting a staggering economic crisis. The combination of mass unemployment and rises in the cost of living has resulted in citizens, young and old, being forced into starvation. So as the wealthy drain state funds and line their pockets, the impoverished suffer, having food taken out of their hands with opportunities for work few and far between.

A notable example of such corruption is Gavin Watson, also known as the Kingpin of Bribes, who became headline news in 2019 for bribing officials. The testimony of four whistleblowers showed that Watson’s company, Bosasa (notably, prison services) garnered state contracts worth $140 million dollars between 2000 and 2016; all former Bosasa executives were paid around $5 million dollars in bribes. The whistleblowers alleged an operation that generated cash through money laundering and then distributed it to buy influence, secure contracts and prevent prosecutions. Transactions were described as cash stuffed into Louis Vuitton bags as gifts and handed over in monthly installments on the side of the highway. Unsurprisingly, Zuma was also at the centre of this scheme, playing a role in Watson’s case during investigations in 2007. Officials have gone as far as confirming that Watson paid Zuma a fee to stop the prosecution of his company and himself. Even Ramaphosa, elected on the promise of being a voice of reason and sweeping away systemic corruption, also accepted a fee from Watson to help with his campaign strategy.

Moreover, this corruption expresses itself in a nation that is still deeply affected by its recent colonial past, amplifying the consequences of injustice along racial lines. So as African resources are developed and sold ostensibly to give greater share to the Black population, the economy remains overwhelmingly in the control of White owners.
The evidence presented here shows how easy it is to manipulate the system. Just like Watson, his colleagues, former and current Presidents, and the Gupta Brothers, have all abused the system to the exclusive benefit of themselves and ‘have captured the organs of the state to do so’.

Ferdusara is Co-Editor for the reimagining peace and justice blog. View all posts by Ferdusara Ali