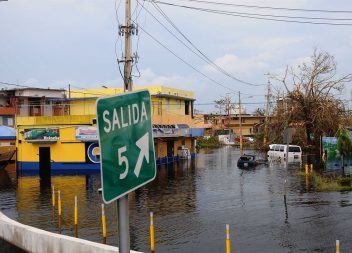 In September 2017, the category five Hurricane Maria devastated Puerto Rico, a small Caribbean island just east of the Dominican Republic and a territory—or, as many recognize, a colony —of the United States. The colonial relationship between the U.S. and Puerto Rico has left the island in an incredibly vulnerable position, which has been compounded by forced privatization and general government corruption.

When Hurricane Maria left the island in a complete state of shock, it opened the doors for further attacks on Puerto Rican sovereignty. It also served as a wake-up call for the island’s residents, many of whom were no longer able to turn a blind eye to either the impending and catastrophic privatization efforts or the total and devastating effects of climate change. The case of Puerto Rico—both its relationship to the U.S, as well as in the aftermath of Maria—serves as an important example of the ways that slow violence can render a population vulnerable to more overt forms of violence after a natural disaster.

Puerto Rico has already been subjected to imposed debt, as well as tax breaks for the hyper-rich, and after Hurricane Maria it is clear that the U.S. is capitalizing on the shock of the devastation.

In his book, Slow Violence and the Environmentalism of the Poor (2011), Rob Nixon posits that slow violence is “a violence that occurs gradually and out of sight, a violence of delayed destruction that is dispersed across time and space, an attritional violence that is typically not viewed as violence at all.” Not only does climate change disproportionately impact “the poor”—most often brown and black poor communities, and very frequently in places far away from white Western societies—in a visceral way now, it also impacts their ability to thrive in the future. Therefore, slow violence should be understood as exacerbating existing hardships and limiting opportunities that have not yet occurred. For people who have had no say in policies that accelerated natural disasters, exposing the role of slow violence also exposes the ways that their vulnerability is made in the not so distant politics of U.S. capitalism.

In the case of Puerto Rico, this can be seen in the compounding effects of debt and austerity measures pre-Maria, and the complete lack of urgency devoted post-Maria—the combined effects of which caused more deaths than the hurricane itself and caused many Puerto Ricans to flee the island entirely. Puerto Rico has already been subjected to imposed debt, as well as tax breaks for the hyper-rich, and after Hurricane Maria it is clear that the U.S. is capitalizing on the shock of the devastation.

Naomi Klein calls this the “shock doctrine,” describing the phenomenon of disasters, natural or man-made, being exploited for profit. In the aftermath of disasters, the public is often immobilized in a state of “shock” and the private sector exploits this moment of paralysis to monopolize discussions around rebuilding. This quickly turns into a pretext for implementing harsh neoliberal policies in favor of steep profits—or “disaster capitalism.” In the case of Puerto Rico, Hurricane Maria provided exactly the shock disaster capitalists needed to finally push through the privatization and austerity measures they had been working on for years.

That, as Klein argues, is the deadly combination: “not just a storm, but a storm supercharged by climate change slamming headlong into a society deliberately weakened by a decade of unrelenting austerity layered on top of centuries of colonial extraction, with a relief effort overseen by a government that makes no effort to disguise its white supremacy.”

Thus, it is important to recognize what is happening in Puerto Rico today for what it is: disaster capitalism at its finest.

Centuries of colonialism and environmental degradation, coupled with the island’s forced economic dependence by the U.S., created perfect conditions for a slow violence that kept Puerto Ricans disadvantaged enough to remain vulnerable to any sort of natural disaster

The emphasis on disaster capitalism and its agents is crucial because it allows us to identify perpetrators of the violence to which Puerto Rico has been subjected—namely, the U.S. government and its private sector. Centuries of colonialism and environmental degradation, coupled with the island’s forced economic dependence by the U.S., created perfect conditions for a slow violence that kept Puerto Ricans disadvantaged enough to remain vulnerable to any sort of natural disaster that might come its way—a reality that has become more threatening as time goes on. Therefore, seen as a climax of Nixon’s slow violence, Hurricane Maria was a convenient opportunity for the U.S. government to force through a program of privatization measures at a time when Puerto Rico was more vulnerable than usual, opening the door for fossil fuel companies, and many others, to take advantage of the newly minted tax haven.

Nixon argues that because of the intersection of different forms of power and oppression within structural and slow violence—especially for those who fall into his category of “the poor”—communities “can seldom afford to be single-issue activists” (Nixon 2011). This is exactly the spirit of Puerto Ricans organizing in the wake of hurricane Maria. The groups that were resisting privatization and austerity before the hurricane are now using the this as an opportunity to tackle the root causes that allowed Maria to go from a devastating weather problem to a disastrous systemic problem—from the poor-quality electric system, to the colonial nature of governance, to the potentially illegal debt imposed by the U.S.

Puerto Ricans have begun to organize and ask hard questions about what they want Puerto Rico to look like in the future, relying on community ties and organizations to help sustain relief efforts as well as build a plan for the future. The various organizations that existed before the hurricane have come together to create JunteGente (People Together), and have begun drafting a people’s platform in order to represent their cause.

Before Hurricane Maria, it seemed as though the shock doctrine was nearly impossible to resist effectively, but it seems as though Puerto Rico may be able to break this cycle.

How can we ensure that slow violence captures public attention in the same way that other types of violence do? Perhaps we should start by looking to Puerto Rico. The island’s inhabitants have treated Hurricane Maria as an opportunity to fundamentally transform society into a Puerto Rico that works for Puerto Ricans. As promising as this may seem, it does not answer the question of how to turn people’s attention to slow violence before an event such as Hurricane Maria happens.

One starting place would be to pay attention to grassroots organizing such as what is happening on the ground in Puerto Rico, and use this work to exploit the shock on these activists’ own terms. Rather than allow disaster capitalists to win, activists are desperately fighting to manipulate this unique moment of shock and transformation in order to create something we have never seen before. Theirs is a unique situation, currently suspended outside of the parameters of slow violence because the detrimental effects have been so glaringly exposed. However, as they continue fighting for sovereignty over their land and to tackle the root causes of the current crisis, this endeavor must be amplified and supported much more widely.

A lack of attention to the issue, or worse, the U.S. winning this tug of war for control of the island, would allow Puerto Rico to slide back into the haze of slow violence until the next disaster strikes.

Rachel Salcedo is reading for an MSc in the Politics of Conflict, Rights and Justice. She is one of the founding members of (Re)imagining Peace + Justice and currently serves as a Senior Editor. View all posts by Rachel Salcedo