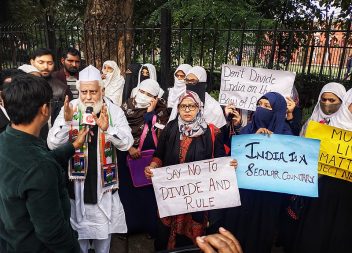 In 2014, the rise of the Bhartiya Janata Party (BJP), a far-right, populist party was characterised by fervent Hindu nationalism and Islamophobic comments in speeches and interviews by BJP leaders. More recently, coronavirus has given further opportunities for the expression of anti-Muslim sentiment by members of the party.

This propaganda began when a religious congregation organized by the Islamic missionary movement Tablighi Jamat experienced a large number of positive coronavirus cases. This created a storm on social media, calling  this the beginning of ‘corona-terrorism’ by a jihadist organization. The Tablighi Jamat is a non-partisan religious movement with no links to any terrorist organization. Regardless, the “coronajihad” hashtag became a new means of spreading toxicity over Islam at an already fraught time for Muslims across  the world.

In various states across India, mosques and Muslim-owned businesses were specifically targeted because of the “cornajihad” phenomenon. In places like Uttarakhand, many shops owned by Muslims were forced to shut down, with Hindu shops allowed to operate as normal. A 22-year-old boy was violently beaten up by a Hindu mob for coming back from a religious gathering. He was accused of spreading “corona jihad”.

These attacks underline the ignorance of the common people about the core tenets of Islam – which can easily be manipulated by the BJP and other Hindu elites. The linkages of all Islamic gatherings to terrorist activities have become the new normal in today’s populist agenda. The core principles of the Islamic faith have never supported and the terrorist activities in recent decades committed notionally in the name of Islamic have caused great harm to those who profess the Islamic faith.

In the wake of “coronajihad” attacks in India,  the World Health Organization released a cautionary statement regarding the profiling of coronavirus cases on racial, religious and ethnic lines. The WHO emphasised that such discrimination is incredibly dangerous during a global public health crisis. Even though the Indian Prime Minister made a desperate attempt at uniting the nation by saying “COVID 19 knows no race, religion, caste, creed or borders, we must stay united in this fight”, the fire was already lit and such statements had little effect. The rise of Hindu nationalism has led to violence against Muslims by numerous members of the BJP.

Muslim men have been beaten for dating Hindu women. Some have been targeted for selling or eating beef. Under this regime, secularism in Indian has come under severe strain. The enablers of the BJP want a Hindu nation into the Islamic republics elsewhere in South Asia and the Middle East. In these places, Muslims have little freedom to choose their religious beliefs, and only non-Muslims get licenses to buy alcohol or pork. The BJP’s endgame is to create a similar Hindu Republic where all Hindus should follow the principles of Hindutva.

In December 2019, the Citizenship Amendment Act was passed, making religion a criterion for Indian citizenship. The law fast-tracked citizenship for non-Muslims from Bangladesh, Pakistan and Afghanistan while removing  “illegal immigrants” from the country. Most of the immigrants from these three countries were Muslims, and many of them feared that they would be put in concentration camps if they didn’t change their religion to become naturalized citizens.

The coronavirus pandemic has provided the latest platform for these forms of Islamophobic hatred. Such treatment of Muslims has angered many secular members of Indian society. A country that for so long has been a haven of religious freedom has, under the BJP, increasingly become a nightmare for Muslims across India