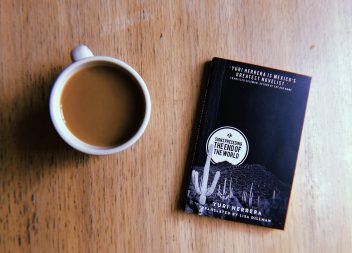 Herrera, Yuri. Signs Preceding the End of the World. Translated by Lisa Dillman. London: And Other Stories, 2015.

Yuri Herrera’s Signs Preceding the End of the World, translated from Spanish by Lisa Dillman, arrived in English in 2015, mere months after many thousands of “unaccompanied minors” from Central America arrived in the U.S. seeking asylum and amidst intensifying presidential campaigns. As the reductive national conversation obsessed over border policy, security, and national identity – but rarely considering the individuals whose border-crossing transgresses these mutually reinforcing processes of nation-building – Herrera’s narrative, barely one hundred pages long, was not just a translation from Spanish to English, but an attempt to translate the very experiences that are so absent from mainstream discussion.

Makina, the novella’s heroine, undertakes a journey to the “other side” on her mother’s behalf, to beg her brother to come home. Mexico and the U.S. are rarely mentioned explicitly. Their deliberate, nameless invocation is almost mythical: “signs prohibiting things thronged the streets, leading citizens to see themselves as ever protected, […] salt of the only earth worth knowing” (56) describes American society, for example. Though Herrera’s ethereal approach to writing borderlands skirts magical realism—a somewhat overused catch-all for Latin American fiction—Signs might better be termed an epic. When we meet Makina, she is already working connections in Mexico to plan the crossing and her movement never stops: confronting abusers on the journey, crossing the river, running from a vigilante militiaman. Finally, she reunites with her brother, whose life in the U.S. under an assumed identity is nothing like his messages home had implied.

Translation—both literal and metaphorical—abounds in Signs, and Herrera’s poetic language (bolstered by Dillman’s translation, carefully replicating his colloquial, immediate tone) illustrates complexity too often ignored by American discourse. Fluent in Spanish and English, Makina’s ability to literally translate her surroundings rescues her from situations that might have meant deportation for a monolingual Spanish-speaker; at one point, she talks several detainees out of an immigration roundup and the arbitrary nature of the encounter comes into stark relief, as we understand exactly what would happen without her.

Figuratively, Makina’s observations of the U.S. (as quoted above) offer the English-speaking reader an inverted viewpoint from which to understand America. Above all, she is presented as a messenger, constantly reaffirming her desire to return home—introducing the possibility that not all migration in North America has the same motivations or stakes as hegemonic narratives would have us believe. Makina’s internal wrestling with expectation, responsibility, and the impermanence of migration makes accessible a state of existence almost invisible in American discourse: “You don’t decide which messages to deliver and which to let rot. You are the door, not the one who walks through it” (18).

On the other hand, one wonders whether the fantastical, epic nature of Herrera’s narrative makes Makina’s case sympathetic only insofar as it is exceptional. For a society so preoccupied with identifying right and wrong among its immigrants, Makina’s example is, frankly, dangerous—it might for instance help the skeptical reader further demonise her brother’s “illegality”. Despite this, perhaps it is not that Herrera and Dillman have somehow failed in rendering Makina’s story, but that many more such accounts will be needed in English before the American conversation surrounding migration truly begins responding to their unquestionable particularity.