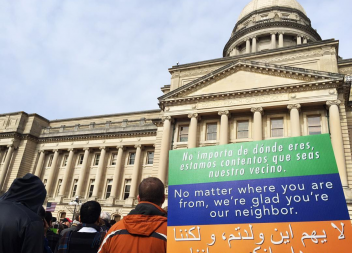 There was a time, not long ago, when demonstrating support for the United States refugee resettlement program was not considered an overtly political statement. This is no longer the case.

The issue has gained unprecedented political salience in the last five years. In the US, the Trump administration used Islamophobia to systematically dismantle the United States Refugee Admissions Program (USRAP). How have these Islamophobic policies impacted international and domestic refugee partners? And how can the program rebuild?

Anti-Muslim discourse has been growing in the US since 2001. As Hanna Uihlein pointed out in a recent piece, politicians on both sides of the Congressional aisle have frequently used coded Islamophobic discourse as policy justification. This Anti-Muslim rhetoric was operationalised more explicitly under the Trump administration. As the anti-immigration platform led to shouts for a wall and the proliferation of derogatory stereotypes, ‘refugee’ and ‘Syria’ became articulated alongside calls for a ‘Muslim ban’ (1). Fueled by an administration vehemently opposed to the USRAP, the ban became official US policy. The presidential order prohibited the entry of foreign nationals from a number of Muslim-majority countries and simultaneously halted all refugee resettlement to the US for 120 days. A subsequent order blocked the resettlement (and all entry) of Syrian and Somalian individuals indefinitely.

These executive orders were followed by years of historically low numbers of individuals approved for resettlement under the annual presidential directive. USRAP had experienced a high degree of bipartisan support since its inception in 1980, and resettlement numbers had remained relatively stable regardless of the party in power.  USRAP was already the most difficult and extensively vetted channel by which an individual could enter the US. Nevertheless ‘extreme vetting’ became a Trumpian trope-cum-policy that introduced processes so restrictive as to be effectively prohibitive. New restrictions targeted nationals from “high-risk countries” to submit to additional screenings. The removal of the ‘needs-based’ component in favor of categories such as ‘certain religious minorities’ also served to limit prospects for resettlement among Muslim refugees. Domestic resettlement agencies were intentionally dismantled through the introduction of several arbitrary restrictions. In some instances, agencies were forced to closed as a result of these new policies.

As a result of Islamophobic policies aimed at destroying the USRAP, many individuals and families previously approved for resettlement have been left in limbo for years. Time-sensitive security clearances and medical checks have since expired and will have to be re-administered before departure. More troubling, US Citizenship and Immigration Services (USCIS) announced that it would be closing the agency’s international offices, and in doing so recalling agents who conduct required interviews for refugee applicants.

This startling national reversal had the presumably desired impact of drastically reducing both overall refugee admissions and further slashing arrivals from Muslim countries. This is an especially startling trend considering that in “each year over the past decade, about two-thirds of refugees living outside of their birth country have come from Muslim-majority countries” (Pew). Now, only a handful of individuals are currently approved for departure via the US resettlement pipeline. The COVID-19 pandemic has only compounded the situation. Here it is worth returning to the point that hateful rhetoric and discrimination on the grounds of religion were the primary, if not the exclusive, basis and justification for this legislation.

The impact of Islamophobia on USRAP will have far-reaching implications for the resettlement program for years to come.Rebuilding this program will require dedicated policy changes. Although the incoming administration faces a number of daunting challenges in the coming weeks, Joe Biden has not ranked the USRAP as a priority for his first 100 days in office. This is regrettable as the program will require ample time to resume operations at its previous capacity. International processes have to be restaffed before the backlog of applications can be addressed. Domestic agencies will need additional support to reinstate operational capacity. Finally, rebuilding USRAP will require inclusive rhetoric on every level to dismantle the Islamophobic discourse – coded and overt – propagated by the Trump administration in an effort to build more welcoming communities.

(1)This articulation relied heavily on misconstruing and manipulating tragic events to fit amongst existing anti-Muslim and anti-immigration framework/discourse. This ability of discursive power to spread misinformation through brute force and repetition was recently demonstrated at the US Capitol on 6 January 2021.