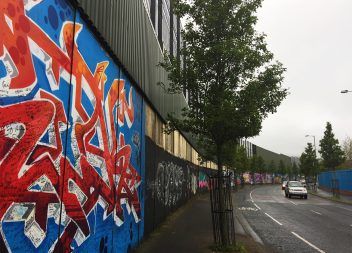 Just as the walls have begun to come down in Northern Ireland, Brexit risks putting another back up. The question remains whether the Irish Peace Process can survive the shock.

At the time of writing, just under twelve weeks remain until the United Kingdom potentially crashes out of the European Union without an exit deal. This means that just under twelve weeks remain until border checks are reinstated between Northern Ireland and the Republic of Ireland, a free-movement zone that has existed in some form since 1923, and completely since 1997.

It’s clear that the return of borders in Northern Ireland is now an all-too-possible reality. As recently as 4th January, the Guardian reported that some 1000 police officers from Scotland and England were preparing for deployment in Northern Ireland in the event of public disorder resulting from a no-deal Brexit. The return of armed officers from Scotland and England echoes the deployment of British soldiers during the worst periods of political violence in the “The Troubles,” a conflict which witnessed over 3000 deaths in acts of terror and assassination over the course of three decades.

The deployment is a sobering reminder that a conflict thought resolved is still anything but, and although violence almost certainly won’t return to levels seen during The Troubles, the process of reconciliation between divided communities remains fragile. Since 1998, when the Good Friday Agreement brokered a political agreement between Nationalists, who favor becoming a part of Ireland, and Unionists, who prefer remaining a part of the United Kingdom, communities divided by decades of violence have struggled to reconcile. School segregation, housing discrimination, and even physical barriers have created divisions, both physical and otherwise, between neighborhoods which remain long after the conflict’s end.

Tearing Down the Walls

Bringing down physical walls is essential to peace to Northern Ireland. Some 99 “Peace Walls” alone separate Nationalist Catholic neighborhoods from Unionist Protestant spaces in Belfast, the capital of Northern Ireland, while even more exist in other towns such as Derry and Portadown. Before Brexit, the future of these walls looked to be ending: in 2017, the Northern Ireland Department of Justice proposed a deadline of 2023 for all Peace Walls to be removed. The first of these were demolished as of 2016, heralding positive signs for the island’s future.

But a hard border between Northern Ireland and its most important neighbor, Ireland, throws this progress into question once again. Complications don’t just arise due to trade barriers, or the logistics of moving from one part of Ireland to another– issues often cited in Westminster Brexit debates. For the people of Northern Ireland, the physical border is as much a psychological barrier to peace as a physical one. The free movement of people in Ireland is viewed by Nationalists as a step towards a United Ireland, in which Irish people on either side of a border are differentiated by little more than kilometers vs miles on roadside signs. For Unionists, open borders still allow Northern Ireland to remain an essential part of the United Kingdom, an important distinction for many Unionists who identify as British. It’s no surprise that over half of people in Northern Ireland voted to remain in the European Union, a vote largely shared in both Unionist and Nationalist communities.

In this light, a hard border in Northern Ireland doesn’t just mean leaving the European Union – it means tearing up twenty years of hard-earned peace, in which removing barriers between Ireland and Northern Ireland is just as important as tearing down the walls between Nationalist and Unionist neighborhoods. Already, radical political factions on either end of the Nationalist/Unionist divide have used the potential for a no-deal Brexit to push their own sectarian goals, to the detriment of the peace process. Sinn Fein, the Irish Republican party, has called for a referendum on Irish Unity in the event of a no-deal Brexit, a referendum Unionists vehemently oppose. For the hard-right DUP, currently in a loose coalition with Prime Minister Theresa May’s Conservatives, a hard border is preferable to a possible compromise customs border in the Irish Sea, which the party believes would delegitimize the British identity of Unionists in Northern Ireland.

Neither of these options will bring about greater peace, but instead could very well serve to destroy it. The 1998 Good Friday Agreement was created under the idea that Unionism and Nationalism could live side-by-side in Northern Ireland without violence, and its success was only possible when powerful leaders on both sides – such as Sinn Fein’s Martin McGuiness and the DUP’s Ian Paisley – decided to battle their differences in the halls of the legislature instead the streets of Belfast. Today’s leaders in the still paralyzed Northern Ireland Assembly, Arlene Foster of the DUP and Sinn Fein’s Michelle O’Neill, increasingly treat Nationalism and Unionism as a matter of politics instead of peace, and the Brexit debate as yet another a vehicle for political goals. Their brinkmanship in these regards could once again send their tiny corner of the island of Ireland over the edge.

While working in Northern Ireland as a peace volunteer in 2017, I saw firsthand how the shock of Brexit might tear apart the fragile peace. Schoolchildren still receive education in segregated facilities; streets in Belfast are still defined as Nationalist or Unionist—with barriers between them; and the extremist militias of twenty years ago remain the forms of the Real IRA or the Red Hand Defenders, ready to take advantage of a return to sectarianism. While there is hope for Ireland’s future – with young people especially beginning to see past Nationalist/Unionist identities – it is an uncertain hope, and one that is very much fragile in the face of a no-deal Brexit.

Reconciliation is a slow, uneasy process, and Northern Ireland still needs its own time to heal from the traumas of the past. During the short-sighted Brexit vote, the peace process was all but forgotten in the rest of Britain, but as the fate of a no-deal Brexit becomes more certain, it can no longer be taken for granted. As the peace walls fall in Belfast and Derry, another still cannot rise in its place in Ireland if sustainable peace is to be achieved. Either a deal must be made where the return of the border is rejected outright, or better yet Northern Ireland could not leave at all.

Devin Windelspecht is a graduate of an MSc in Conflict, Rights and Justice at SOAS University of London and the current Editor in Chief of (Re)imagining Peace + Justice. Prior to SOAS, Devin worked in journalism in Bosnia and Serbia and conflict reconciliation in Northern Ireland. View all posts by Devin Windelspecht

One thought on “Is There Still Hope for Reconciliation in Northern Ireland?”