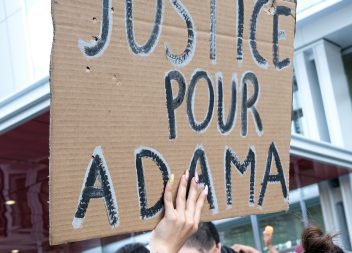 In the wake of protests against police brutality in the United States brought on by the killings of George Floyd and Breonna Taylor, anti-racists protests emerged around the world during the summer of 2020, including in the United Kingdom, Germany, and Japan. In this photo essay, SOAS postgraduate Canela Laude offers a window into the “Justice pour Adama” protests against police brutality in France during June and July of 2020.

In June, anti-racists protests in France sparked in response to the death of George Floyd in the US and the protests that ensued across America. In France, the response was led by Assa Traoré, the sister of Adama Traoré, a young black man killed by the police by suffocation in 2016, and whose death circumstances are still under investigation.

Assa Traoré has been pushing for a new autopsy in order to unveil the true circumstances of her brother’s death, while connecting with other families who lost family members due to police violence, in order to lead unprecedented anti-racist and anti-police violence protests in Paris and all over the country. Soon after the French lockdown ended, 20,000 people were out in front of a Paris courthouse protesting alongside the family of Adama Traoré and chanting “Justice pour Adama.”

A protest sign reading “From Minneapolis to Beaumont sur Oise”, respectively the cities where George Floyd and Adama Traoré were killed, summarized the general feeling of international interconnection in the struggle against police violence. A second protest, 11 days later, saw the same renewed energy, with 15,000 people out in the streets on Paris’ Place de la République.

As summer in France rolls on, the movement has continued with a third protest on July 18th in Beaumont sur Oise, where part of the Traoré family lives and where Adama was killed.

“We are Black Lives Matter,” said Assa Traoré in an interview for the New Yorker. “The two fights echo each other, so that we’re pulling back the curtain on France, in saying, ‘People of the whole word, look what’s happening here.’ ”

Canela Laude is a photographer and postgraduate in Politics of Conflict, Rights, and Justice at SOAS University of London. She is currently based in Paris, France. View all posts by Canela Laude

2 thoughts on “Justice Pour Adama: Covering the Protests in Paris”