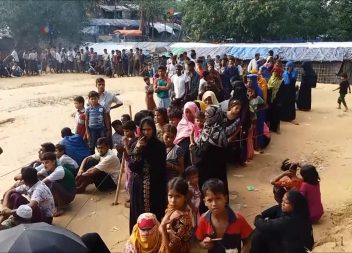 Over the last 20 years, Islamophobia has captured the headlines worldwide – from France and Germany to Australia, the UK and the US – and in Myanmar. Since the 1960s the Rohingya population has suffered systematic racism by the Myanmar government.

Global Attention on the Rohingya was further heightened in 2011, by what many would describe as ‘hate speech’, that circulated over Facebook by the radicalised monk, Ashin Wirathu. This caught the attention of the international media and led to a major public outcry, many protesting in the UK and worldwide on the streets and outside Myanmar’s embassy demanding justice for the people of Rohingya and describing  this direct attack as a form of Islamophobia.

The fleeing of the Rohingya has not stopped. In the recent media, it has been shown that many Rohingya are paying large sums to travel by boat or escaping by foot, grabbing a few personal belongings. Many have been forcibly displaced into neighbouring states such as Bangladesh, India, Thailand, Indonesia, and Malaysia. Thailand and Bangladesh initially refused them entry, abandoning them at sea. Today, over 800,000 Rohingyas live in Cox’s Bazar in Bangladesh, one of the world’s largest refugee camps.

The UN has confirmed that the Myanmar military’s campaign against the Rohingya has been motivated by ‘genocidal intent’ and that this is a ‘textbook example of ethnic cleansing.’ Nevertheless, the Rohingyas’ pleading desperation has been dismissed as ‘exaggeration’ and silenced by the leading politician in Myanmar. Aung San Suu Kyi, who now supports the same army that for twenty years denied her freedom. She has gone from being a victim to a heroic leader and now one of the main perpetrators of the outbreak of mass violence against the Rohingya.

In 2019, Aung San Suu Kyi pleaded for the International Court of Justice (ICJ) in the Netherlands to drop the genocide charges against the Myanmar government. Can she not see what’s happening in her state?

According to the satellite imagery of ‘new destruction in Rakhine state’ between October and November in 2017, around 354 Rohingya villages were destroyed. Rakhine’s Buddhist monks and Burmese soldiers allegedly killed 24,000 Rohingya civilians, committed rape and other forms of sexual violence against Rohingya Muslim women and young girls, and many civilians were thrown into fire pits.

Why have the UN and other international bodies been so ineffective in resolving this conflict and delivering justice for the victims?- Meanwhile, the Myanmar government has rejected the ICJ’s ruling ordering measures to prevent the genocide of the Rohingya, meaning the court’s judgment has had little impact on the ground. Also, the paltry sanctions imposed on the Burmese by various governments, including the US, UK, and the EU, have had symbolic value but failed to deter the Burmaese military’s actions. These sanctions have only targeted individual members of the army  – mostly freezing their assets – , nowhere near the scale of other ‘interventions’ as can be seen widely across the Middle East and other areas of interest from the old colonial masters. And despite the Burmese government agreeing to take the Rohingya back, Rakhine remains a hostile place. Would the Rohingya people want to return to a country that denies them citizenship and where conflict could reignite?

The Rohingya genocide and the subsequent refugee crisis did not come without a warning. Like all genocides, this was systematically done, through targeted legislation and many years of repression, dehumanisation, polarisation, extermination and denial of the Rohingya Muslim people. This catastrophic case of the Rohingya genocide exemplifies the horrific consequences of structural Islamophobia, culminating in a refugee crisis.

A young heavily pregnant woman walked for five days and gave birth before entering Bangladesh. She now resides in a refugee camp made out of frayed cloth, without clothes or food for her newborn child and only a chewed-up pillow supplied. This case exemplifies the impact of the Myanmar government’s actions against the Rohingya – a beautiful blessing born into a state of discrimination and violence; a by-product of the political era.

2 thoughts on “Islamophobia and the Rohingya Genocide”