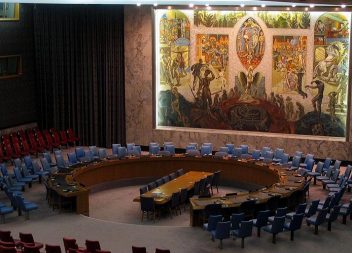 In this article, SOAS postgraduate Ruth Artiles Valero focuses on the state-centricity that characterises the United Nations’ Women, Peace and Security Agenda’s foundational pillars. It explains how and why an adherence to state-centricity and an authentically feminist approach to international relations, are most likely mutually exclusive.

One could well argue that the UN’s ‘gender mainstreaming’ goal has been shrunk in such a way that it no longer deserves the “feminist” label, and this would not be an understatement. Curiously, it is this very label the one which has enabled an all-too-simplistic championship of Resolution 1325, having been described as ‘one of the most inspired decisions’ of the Security Council and as a genuine commitment to women’s participation, global gender equality, and an advancement of international peace and justice. It culminated in a call for the inclusion of a gender perspective in peace building processes, expressing the need to draw attention to the specific protection needs of women and girls in conflict. However, the gap between the ambitions laid out by the WPSA and contemporary, global realities, are very significant.

In late 2000, some of the enabling factors influencing the drafting of resolution 1325 in the Security Council included the large international attention received by the sexual violence in the Yugoslav wars of secession, the intense horror experienced by women during the eastern DRC conflict, and the surge of women’s peace movements in West Africa in the late 1990s and early 2000s. However, the WPSA’s attention to sexual violence, and rape in particular, created links between ‘women’ and ‘security’ which were not precisely accurate, nor helpful.

Rape as a weapon of war – a method “cheaper than bullets” with which to terrorise and even eradicate populations and national identities –  is  the subject around which the WPSA has focused most. As Carol Cohn (2008) noted, “the redefinition of rape as a war crime, rather than a ‘natural’, ‘inevitable’ ‘boys-will-be-boys’ inherent aspect of war, [will create] some deterrent effect”. This is an important first step when it comes to accomplishing “negative peace”, defined primarily by the absence of conflict or violent acts. However, it remains off-limits within the WPSA to address the intersections of, say, gender and ethnicity or sexual orientation, as well as the gender regime that makes a physical, sexual attack on a woman a blow against the “honour” of men and the community they both belong to (to name just one of the various possible impacts).

So long as these subjects are considered “off-limits”, how likely is it really that rape will stop being used as a weapon? How genuinely feminist are these measures? A feminist approach is grouped in the broader category of theoretical reflectivism because it involves theorising beyond state-centric understandings of war and looks instead at how international politics affects and is reciprocally affected by masculinities and femininities. In addition, the core concepts which are employed in the field (war, peace, security, nations) are themselves gendered, seeking to problematize the very politics of knowledge construction.

The focus on rape as a weapon of war has created new hierarchies and forms of exclusion. The process of equating a threat to women’s bodies as a threat to national security has demonstrated that the ultimate concern is national securitisation and not the elimination of sexual violence per se. For instance, the WPSA framework explicitly states that individual forms of sexual aggression are not sufficiently threatening or socially destabilising as they do not fit in the “weapon of war” paradigm. Curiously enough, a study by Peterman et al., (2011) showed that even in eastern Congo, the majority of sexual violence during times of conflict was perpetrated by average, non-combatant civilians and within marriages. Moreover, there is a myriad of forms of violence experienced by vulnerable women constantly that go beyond the “sexual assault” category. Examples include physical, financial, emotional, verbal, psychological, digital, cultural, and spiritual (or religious) abuse.

With this considered, it is apparent that a clear emphasis has been placed in state security over the feminist goal of equality and justice, giving way to a process which is ultimately obscuring and over-simplifying the violent structures that lie beneath the current world order. In the end, there is an uninterrupted continuation of a dynamic in which neither the perpetrator nor the victim gets the chance to ‘speak’, despite the fact that the securitised subject has been broadened. With WPSA having been created as a response to the movements carried out by women at the grassroots, it is concerning that such few UN national action plans (as of 2014, only about a third) specify civil society in their drafting. Thus, the WPSA has mostly empowered technocrats and gender experts when it comes to designing, implementing, evaluating and measuring public policies, rather than women at the bottom.

In introducing gender inclusion simply as an ad-on to the status quo system of peacebuilding, rather than truly reinventing it through a feminist lens, the WPSA continues to make use of the master-narrative of top-down strategic studies which decontextualizes issues of war and violence. For instance, the inability to acknowledge the pronounced asymmetry between Israelis and Palestinians resulted in measures put in place by Resolution 1325 never yielding tangible results in the conflict. In other contexts, the WPSA may actually become an obstacle to achieving gender justice and security especially when laid out next to Western examples. In applying homogenised notions of norms which would make an impact in liberal, Western, democratic nations (such as mere inclusion of women in decision-making processes), the WPSA is further contributing to silencing the real struggles which are faced by women worldwide, as engrained power relations, context-specific norms, and meaning systems are left unscrutinised.

In regards to women, the WPSA has focused on the themes of women as natural peace-makers, positioning women as genuinely interested in the long-term or future, women’s participation as likely to make peacekeeping more effective, women as less corruptible than men, and women as crucial to economic prosperity. It is debatable how feminist this stereotyped consideration is. Clearly women, like men, do not fall under a homogenous block, especially when taking into account groups of men, women, and individuals from different cultural backgrounds. Not only does this not provide us with a real picture of who women and other vulnerable communities are and what they do, but can bring about very serious, counterproductive consequences. For instance, the immutable-looking labels which the WPSA has attached to the concept of “women”, means that alternative femininities (such as queer, dynamic or postcolonial femininities) can easily be excluded (again) when failing to embody and/or enact this construct. The overly-simplistic narrative has fetishized rather than solved these pressing issues.

The simplification of this situation has also facilitated its commodification. Used in everyday language, the idea that in contexts of war women are unanimously vulnerable because of their susceptibility to acts of sexual violence, has been normalised. This is worrying. The moral, ‘humanitarian’ imperatives for the safety and equality of women and men, which have emanated from this logic, have also been used as justification for (counterproductive) Western intervention in war zones. Moreover, numerous reports have even indicated that within the aid world, agencies go as far as to compete with one another for primacy in “conflict-related sexual violence” as an issue-area. This is reflected through behaviours known as “victim appropriation”, and is also appreciated in situations where information is purposely withheld  from other agencies/coordinating bodies.

Feminism is a genuinely useful political and analytical tool because it contemplates social and power dynamics which happen on deeper levels. However, all this shows the many problems which arise when we decide to label measures as “feminist” when they are not. It can therefore  be determined that meaningful outcomes in the field of feminism are unlikely unless international institutions are seriously reinvented. Authentically feminist accomplishments and state centric conceptualisations of ‘security’ are mutually exclusive.