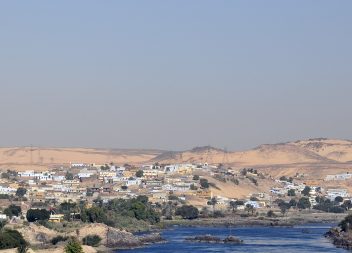 On November 4, 2017, Gamal Sorour died in an Egyptian prison after falling into a diabetic coma. He and eight other Nubian detainees had declared a hunger strike to protest their holding conditions only five days prior. The nine men had been arrested in September of that year for staging a peaceful singing protest in Aswan. To this day, the fate of these Nubian activists remains unknown as they face a slew of charges, including organizing a political protest and disrupting public peace, in an ongoing trial.

It should come as no surprise that these peaceful protestors were arrested in September 2017 for demanding their their constitutionally guaranteed right of return to their ancestral lands, from which they were displaced at four separate junctures throughout the 20th century in order to facilitate either the construction or expansion of the Aswan Low and High Dams. Neither should their treatment, nor their 18-months-long detention shock anyone familiar with the current political climate in Egypt. As has been widely documented by international human rights organizations, the government of President Abdel Fattah al-Sisi has waged a notoriously brutal security crackdown since the summer of 2013, when the Supreme Council of the Egyptian Armed Forces seized power from sitting President Mohamed Morsi.

However, despite this overarching climate of political and social repression, the Nubian activists’ case stands out as another episode in a long history of marginalization and exclusion of Nubian communities from mainstream political, social, economic, and cultural life in modern Egypt—a process that has been dubbed by Nubian activists as “de-Nubianization.” A distinct ethnic community indigenous to the region between Upper Egypt and Khartoum in neighboring Sudan, Egyptian Nubians have long borne the brunt of a state that excludes them from processes of policymaking and political representation.

With the rise of Egyptian nationalism at the turn of the 20th century, mainstream nationalist narratives designated Nubian languages and culture as unrefined and incompatible with the modern era. This facilitated the marginalization of Nubians from key political and economic processes, as well as their negative and racist portrayal in national cultural products, as observed by scholar Viola Shafik: “Egyptian cinema has with few exceptions shown Nubians as ever-smiling, simple servants who speak only broken Arabic” (85).

These trends were all but exacerbated by the fact that Nubian languages are not, and never have been, taught in Egyptian schools—yet another demobilizing strategy aimed at distancing Nubians from any effective participation in political, cultural, and economic life in Egypt.

This is not, however, the impression one would get from watching the latest promotional video for the 2019 Arab and African Youth Platform, which launched Saturday, 16 March 2019, and vaguely promised to “incubate youth discussions and ideas through a series of events discussing various topics.” This conference falls under the umbrella of Egypt’s annual World Youth Forum (WYF), the first of which was held in 2017, “under the auspices of President Abdel Fattah al-Sisi.”

The video begins with a catchy drum beat, played with the hands of a black man whose face we do not see. Following a series of scenic shots of Pharaonic temples in Aswan, we cut to shots of two women, each of whom hands colorful balls of string to several Nubian children who joyfully run across idyllic Nubian landscapes. The rest of the video follows the journey of these balls of string as they move from hand to hand, eventually received by a number of Nubian women weavers, whom we see preparing ceremonial boat sails, woven with the logo for the conference. “Aswan is getting ready,” the English voiceover announces.

The organizers behind WYF have faced heavy backlash in the past for their manipulation of millenial-aimed buzzwords—“engage!” “act!” “change!”—in the service of a state sponsored project that clearly aims to present a less-than-accurate portrayal of the state of youth engagement in Egypt. A brief glance at WYF’s marketing materials makes it immediately apparent that this is an event geared primarily towards representing Egypt to the West as a progressive country that truly invests in its youth and seeks their inclusion in policymaking processes. In 2017, the promotional hashtag for the conference’s inaugural edition, #WeNeedToTalk, prompted a powerful social media counter-campaign that sought to shed light on the array of social and political issues curtailing Egyptian youth’s capacity to participate effectively in the public sphere, from vast wealth inequality to severely limited media freedoms, staggering levels of political prisoners, and widespread sexual harassment—to name but a few.

However, in addition to promulgating this hyper sugar-coated portrayal of Egyptian youth and society, WYF’s marketers also traffic in a narrative that manipulates cultural symbols in the service of their promotional aims. On first glance, the 80-second video promoting the Arab African Youth Platform appears to be a dazzling celebration of Nubian culture. There are striking, colorful shots of famed Nubian spices, beautiful panoramas of the Nile River and Nubian islands, and a marked focus on the music, craftsmaking, and bodies of Aswan’s inhabitants – women, men, and children alike. Although this is a welcome shift in the hegemonic visual narrative typically associated with representation of Nubians in Egyptian cultural products, it also betrays a troubling hypocrisy at the heart of the Egyptian state’s relationship with its Nubian community—a community whose political representation, access to social services, and basic human rights have been consistently denied at the hands of state authorities from the early 20th century to the present day.

To exploit the symbolic significance of Nubian culture in order to market a conference, organized by the very same state that has worked for decades to disempower Nubian communities, is characteristic of the current political regime in Egypt, defined as it is by striking contradictions.

On the one hand, President Sisi declared 2016 “the year of the youth” and called for the launch of WYF; on the other hand, he has imprisoned more youth than any of his predecessors (a monumental feat in and of itself). Moreover, although the Egyptian Parliament legalized the creation of the Supreme Authority for the Development of Upper Egypt in June of last year, it deliberately excluded Nubian MPs from discussions regarding the details of this legislation and continues to ignore activists’ calls for the implementation of Article 236 into the 2014 Constitution, which guarantees Nubians the right to return to their ancestral lands. In fact, as in Sorour’s case—and others’ cases—these calls are met with imprisonment, as well as state sponsored allegations of separatism and terrorism, tinged with racist anti-black sentiments.

Much like how WYF’s promotional materials portrayed a fabricated image of an Egypt that is welcoming of youth involvement; this new Arab and African Youth Platform has added an altogether new layer of promotional dishonesty. By manipulating Nubian cultural symbols to promote a state sponsored youth conference supposedly aimed at encouraging African-Arab youth engagement (whatever that means), conference organizers have attempted to represent a feigned appreciation for Nubian cultural symbols, one that finds no resonance either with state policies or with the actual lived reality of contemporary Egyptian Nubians.

Salma Khamis is a postgraduate masters student at the School of Oriental and African Studies (SOAS) studying Comparative Literature, with a focus on modern Arabic literature. Her current research interests concern revolutionary discourses in contemporary women’s vernacular poetry in Egypt. View all posts by Salma Khamis