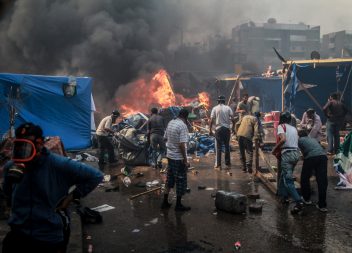 On Friday, April 9th, over 80 protestors demonstrating against the military coup in Myanmar were killed by state security forces in the town of Bago, near the country’s largest city of Yangon. The killings mark the latest in a series of state massacres that have seen over 600 protestors killed since the February coup. Meanwhile, in the Tigray region of Ethiopia, hundreds of Ethiopian citizens were massacred by Eritrean soldiers fighting on behalf of the Ethiopian government in the town of Axum. In both cases, despite international condemnation, acts of state violence have continued, and those responsible for the massacres have gone unpunished.

Halfway across the world from Myanmar, President Macron of France announced in December that France would continue to sell arms to Egypt, despite reports of continued human rights abuses by a regime that came to power through a military coup in 2013 and the subsequent massacre of between 800 and 1000 supporters of the previous president — a massacre for which no members of the Egyptian military have been accountable.

These three seemingly disparate events follow a particular logic of state violence in which the massacre has become a central tool of repression. Through the more “limited” violence of massacres, states can continue to strengthen their rule through violence and terror, while largely avoiding the international pariah status of Libya’s Gaddafi and Syria’s Assad. So too can they rely on the tried and true tendency of nominally rights-supporting Western states: to look the other way, especially when military or economic ties are on the line.

The result is a world less safe, more violent, and in which state sponsored massacres are becoming an increasingly common tool of repression. But it doesn’t have to remain this way.

To end state-sponsored massacres, we have to think of new ways to break the logic of violence that makes massacres so useful to regimes.

Ending the Logic of Violence

Is there a logic to the violence behind massacres? Looking at past and current massacres suggests that, rather than spontaneous acts of bloodshed,  they are in fact largely planned with the intention of furthering repressive rule. Through massacres, states set “us vs. them” lines of being, which portrays all dissidents to the regime as criminals, traitors, or terrorists, in which violence is the only acceptable response, in what is known as the “civil war regime.”

In Egypt in 2013, these lines took the form of the military vs. Islamists, who were labeled “terrorists” and an existential threat to the state in which the only response was force. A similar scenario is occurring in Myanmar today, according to the New York Times, in which “a steady diet of propaganda feeds (the military) notions of enemies at every corner, even on city streets…the cumulative effect is a bunkered worldview, in which orders to kill unarmed civilians are to be followed without question.” In these environments, massacres of civilians are not just a result of us vs. them lines, but also help reinforce future rule by rationalizing massacres as necessary to protect the state from internal enemies. States that perform massacres are therefore more violent and more repressive, as the regime increasingly resorts to violence to maintain power.

There is also a second, equally important, logic to massacres: their ability to be forgotten, ignored, or rationalized by the international community which might otherwise be compelled to act in larger-scale acts of violence (see Libya, 2011). In 1989, the response to the Tiananmen massacre was waved away to permit China’s integration into the global economy. Similarly, the Rabaa massacre of 2013 was forgotten to gain Egyptian military support against the Islamic State. Authoritarian regimes know this, and are willing to wait out short-term costs knowing fully well that the long-term repercussions will be minimal.

While the international community has little power to stop the effectiveness of the first logic of violence, it has tremendous leverage over the second. To stop massacres, the international cost of a massacre must be higher for the regime than its domestic benefits –  in short, to make massacres “illogical” as regimes weigh their own risks.

What tools do we have to make this a reality? While international military intervention has a complicated history of abuse, it doesn’t mean that non-military options can’t be equally as effective, especially when coordinated multilaterally across nations. Ending military assistance to regimes that commit massacres – as the Obama administration initially did against Egypt in 2013 before backtracking two years later – is a powerful first step, as are targeted sanctions on responsible leaders that minimize the impact of nationwide sanctions, which disproportionately impact the poor and marginalized. Regime actors can also face the threat of prosecution across a coalition of nations under the principle of universal jurisdiction for crimes against humanity, a precedent recently set in Germany in the ongoing trial of a former Syrian regime military officer.

These are certainly not the only tools available, and by setting a framework adopted across a series of nations that can quickly “snap” into place in the event of massacres, the threat of real and long term consequences can serve as enough of a disincentive for a regime to step back and de-escalate violence in the face of dissent.

There is a real short term risk in this, namely in the willingness of authoritarian powers such as Russia to openly support states that conduct massacres, such as Syria and recently Myanmar. Traditionally, this has been the main rationale for maintaining ties with violent regimes: that it is better to keep regimes close and slowly adapt their behavior than allow the emergence of a Chinese or Russian authoritarian bloc.

The problem is that this hasn’t worked – Egypt, for example, is now more repressive than ever before, while rights abuses have only continued during Ethiopia’s Tigray conflict. Instead, a set framework of actions in the wake of massacres gives states a choice: to rule through violence, or to continue to benefit from access to the larger international community, a choice most authoritarian leaders have until this point been sheltered from making.

The problem is not that massacres are unavoidable – it is that, for too long, nations that claim to stand for human rights and the responsibility to protect have consistently put economic, military, or geopolitical priorities before ending mass violence. But regardless of the short-term costs, in the long term, we have the opportunity to create a powerful new norm against state-sponsored massacres, one that can save hundreds of thousands of lives and create a safer and less violent world. Isn’t this a risk worth taking?

Devin Windelspecht is a graduate of a MSc in Politics of Conflict, Rights and Justice at SOAS University of London and the ex-Editor in Chief of (Re)imagining Peace + Justice. View all posts by Devin Windelspecht