In the two weeks since a military coup against the government of Myanmar, growing numbers of civilians have taken to the streets of Yangon and in cities around the world to demand the release of jailed democratically-elected representatives, including the domestically popular, if internationally disgraced, icon Aung San Suu Kyi. The demonstrations in Myanmar have featured a vibrant array of references to meme culture and themed attire in an appeal to garner support against the military’s attempt to take control of Myanmar for the next year. Perhaps the strongest gesture throughout the peaceful protests has been the three-finger salute. The sign of solidarity, first used in anti-coup protests in Thailand, is attributed to the Hunger Games series. The dystopian tale of underdog youth taking on vicious and authoritarian evil has become an international rallying cry across a new generation of activists.

The fragile steps towards a representative democracy under the Thein Sein government in 2010 ushered in unparalleled levels of international engagement that fundamentally altered Myanmar’s society in official and unofficial channels after nearly six decades of rule by the military junta. International aid and foreign leaders poured in to demonstrate support for the transition while civil society reforms exponentially increased internet access across the country. Alongside the Hunger Games references, popularized signage and social media posts communicate another common message: “You’ve [messed] with the wrong generation.”

Both the actors and the political landscape have changed. General Min Aung Hlaing has misjudged the dynamics and discourses that have become broadly entrenched over the past decade. Internal forces that the military has long sought to control, through overt violence and constitutional measures, are quickly gaining momentum. By some local estimates, the growing number of civil society actors participating in the protests may be substantial enough to wrestle effectual control away from the military in under three months. Subsequent reports have also cited growing support from within the police force, most often evidenced through a surreptitious display of the three-finger salute.

The lack of international reaction – at the time of writing only New Zealand and the US have responded to the coup with sanctions – is all too familiar for Myanmar’s pro-democracy movement and ethnic minority communities like the Rohingya, Karen, Chin and others.  Beyond a stifling set of international sanctions, external actors have historically provided little meaningful support to the people of Myanmar. The resistance, swollen in size and resolve, is likely to be seen as an increasing threat to military dominance. This troubling dynamic could soon lead to an escalation of violence unless some form of external pressure is applied to shift the balance of power. In the Hunger Games series, ‘tributes’ appeal to sponsors to provide critical aid and material support. Provisions, especially when leveraged at the right time, can alter the outcome of the ‘competition.’ Anti-coup protests, if supplemented by timely strategic support from the international community, could help to restore the democratically elected government and signal robust backing for transitional policies. 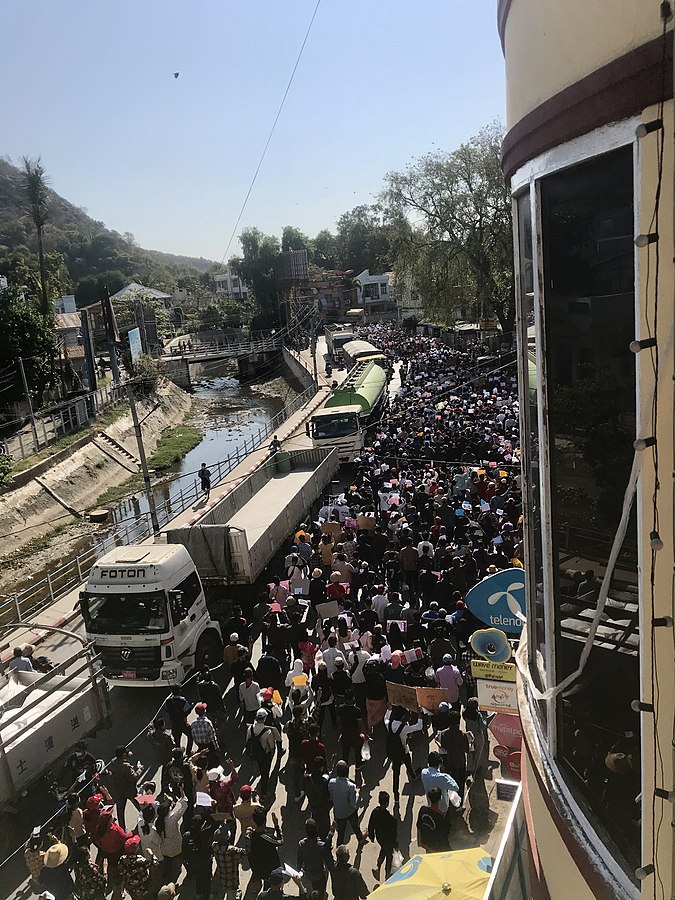 Explaining the prominence of the three-finger salute, one protester responded, “We knew that it would be easily understood to represent concepts of freedom, equality, solidarity.” And while the realm of international relations is markedly nuanced, identifying authoritarian violence in Myanmar is relatively straightforward. The only question that remains is whether the international community will rise to match this resolve and put substance behind the words ‘May the odds be ever in your favor.’