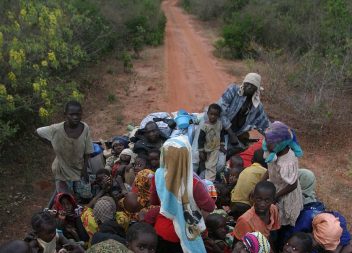 At the ICC, survivors have no choice but to compete for recognition and reconciliation—and ultimately, for justice. Acquittal complicates this inequity: well after the trauma is revisited in testimony, telling the truth becomes a performance for the sake of the Court, not for justice. This article, which examines the role of the ICC in the Central African Republic (CAR), is the first in a series of posts that will explore the impact of acquittal in international criminal justice on ongoing conflict.

A survivor’s participation at trial is heavily limited by legal procedure. While courts aim to produce a public narrative of fact, to do so they must establish their own legitimacy as objective arbiters of truth. Enshrined in the very foundation of a justice process that is considered “fair” and “objective” is the notion that the courtroom is a space designed for telling what is factually true, a space that is not beholden to those doing the telling. Thus, courts find value in only specific types of testimony, given in specific ways.

In the ICC, the rules of procedure dictate the types of testimony—and indeed the kind of victim—it considers too subjective and unreliable to give admissible evidence. The court, therefore, also dictates the kind of testimony, and the victims, that are worthy of public recognition and acknowledgement. As one young Central African woman put it to Marlies Glasius, “We want the Court think about justice but also to support us to redo our life.”

As the ICC struggles to relate to survivors, it is imperative to examine what happens when international crimes against humanity are proven, but go unpunished as commanders are acquitted.

At independence in 1960, political power in CAR was arranged along fault lines of neglect, in a complex network of personal favors and predation left by French colonization. For decades, multiple coup d’états and mutinies formalized violence as a mechanism of political control. The violence that began as unchecked personal animus between President Patassé and former Army Chief of Staff General Bozizé in 2002, escalated over the course of a year to a coup characterized by widespread cruelty and brutal violence targeted against civilians.

Following Bozizé’s bloody and brutal coup, the ICC charged Jean-Pierre Bemba Gombo—Patassé’s Congolese rebel commander, who led the Mouvement de Libération du Congo (MLC) while they used sexual violence to terrorize communities—with crimes against humanity for murder and rape and three counts of war crimes for murder, rape, and pillaging. On 20 June 2016, Bemba was convicted, becoming the first person to be convicted of rape on the basis of command responsibility at the ICC. However, two years later, Bemba was acquitted on appeal. Though the Appeals Chamber did not contest that Bemba’s troops perpetrated grave crimes against humanity as well as war crimes, it challenged his responsibility for these crimes as the MLC’s commander.

According to Article 28 of the Rome Statute, an individual commander is criminally responsible for crimes committed by forces under their direct or effective authority, command, and control, when that commander knew or should have known forces were committing or about to commit criminal acts, and when the commander failed to take “all necessary and reasonable measures” within their power to prevent, repress, investigate, and prosecute those crimes.

The ICC’s charges against Bemba established that the such criminal acts as sexual violence or forced conscription were the legal responsibility of Bemba himself, rather than that of MLC perpetrators. Sexual violence, pillaging, murder (or the numerous other crimes that the Prosecutor failed to include) were determined not to be individual instances of a poorly managed military “taking advantage of a coercive environment,” but rather the direct and explicit acceptance of crimes against humanity as a means of waging war. Thus, the Trial Chamber treated command responsibility as a mode of liability.

In the context of how to ICC understands the nexus of command responsibility, this is important because it establishes a clear line between a commander’s failure to act and what E. Van Sliedregt describes as “a form of participation” in violence (Clark 2016, 672, see FN 38). Because a commander engages in violence through the actions of the troops they lead, their liability for violence rests not only in their own actions, but on those of their troops. When a commander fails to explicitly discourage a crime against humanity, the commander is personally participating in the crime.

Despite acknowledging that MLC soldiers perpetrated crimes against humanity and war crimes, particularly rape and other forms of sexual violence, the Appeals Chamber’s majority opinion concluded that the conviction exceeded the charges; Bemba could not be responsible for every crime perpetrated by every, and in this case any, MLC combatant, he was not located within CAR at the time of those crimes.

Thus, Bemba’s acquittal served to establish a legal framework centered away from the victim and indeed the violence of the acts of crimes against humanity.

The process of telling, and the outcome of acquittal, effectively flattens public memory of sexual violence. To be the Court’s victim is to inhabit a constructed, liminal identity caught up in the willingness to perform a personal memory of trauma to the satisfaction of the Trial Chamber and its telling of factual truth. While the Trial Chamber memorialized a flattened memory of violence in CAR, the Appeals Chamber atomized the distinct features of responsibility and victimization.

In acquittal, the Appeals Chamber vacates not just the sentence, but substantively, the meaning and legibility of legal justice for survivors. Victims, though welcomed for their participation upholding the legal procedure of justice, are then literally stripped of their recognition as victims and its sole benefit: reparations. In so doing, the Appeals Chamber—and the ICC at large—truncates any actualization of legal justice.

COMPETING WITH THE ICC

It is critical to understand the impact of a survivor’s participation in trial not just for the Court, but for survivors and the larger project of transitional justice. In performing as a “victim” for the Court, survivors become the objects of justice, instruments a court uses to demonstrate that there is someone who needs to be punished. In its process of “unmaking” these victims, the Bemba Appeals Chamber disconnected victims from the crimes that they survived, but also from reclaiming a sense of ownership over what they survived by testifying.

Through this process, the ICC creates divergent streams of justice for victims at trial, preferring the justice that is legible to the institution over a form of justice that is legible to the survivor. Participating in justice at the ICC means that a survivor must allow themselves to be made and unmade a victim at the will of the Court. They must accept a practice of performing justice in which they are given and necessarily then denied the status of victim. Thus, survivors who testify are made into instruments of justice, left waiting for recognition to be able to “redo” their lives and live beyond victimization. Without recognition and reparations, the practice of transitional justice remains located theoretically and practically outside CAR, at the ICC.

Because such institutions of transitional justice reproduce an identity for victims and perpetrators that is caught up in diametrically opposed and competing meanings, the ICC—and the memories the Court constructed as it adjudicated who is responsible—loses sight of survivors needs.

It matters where justice is done, by who and for whom. When survivors and their needs do not drive this process, the process itself loses its legitimacy. Worse still, it excludes survivors from reconciling what they have survived in meaningful ways.

When the practice of legal justice ultimately fails to articulate liability for those criminally responsible, violence and injustice live on in the public memory. Targeting ordinary people with personal and intimate violence becomes the normal business of politics. To date, sexual violence remains rampant in the CAR: ex-Séléka and anti-Balaka rebels who terrorize CAR today use the same methods as the MLC to exert control over communities. And yet, the ICC’s CAR II investigations of Alfred “Rambo” Yekatom and Patrice-Edouard Ngaïssona—though they cover a broad scope of violence over the significant period of CAR’s most recent civil war—don’t include any charges of gender-based violence, sexual violence, or rape. Victims of Bemba’s violence, Bozizé’s violence, and Djotodia’s violence are left without legal recourse for what they have survived and continue to be subjected.

Survivors are left to wonder if the ICC has given up on justice for sexual violence and rape and we are all left to question whether justice at the ICC is really justice at all.

Megan Manion is reading for an MSc in the Politics of Conflict, Rights and Justice. She is one of the founding members of (Re)imagining Peace + Justice and currently serves as the site’s co-Editor-in-Chief. View all posts by Megan Manion