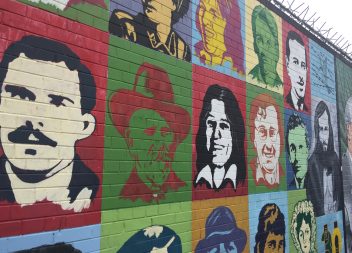 In 1981, Provisional Irish Republican Army member Bobby Sands – made famous as one of ten men to die during a hunger strike protesting the British government’s refusal to allow IRA members Prisoner of War Status — became the first Irish Republican to win election to the British Parliament. HIs victory, and subsequent death, opened the doors for an upwelling of political support for the IRA’s political wing, Sinn Fein. In 1983, Sinn Fein began to run for Northern Irish and British seats, even as the militant wing of the IRA continued to perform acts of violence — a strategy known as “The Armalite and the Ballot Box”.

Nearly 40 years after Sinn Fein’s first electoral victories, and 15 since the complete disarmament of the IRA in 2005, Sinn Fein’s historical association with IRA violence has continued to cast a long shadow, making the political party a pariah in Dublin and London even as it represents the largest Nationalist (pro-Irish Unification) party in Northern Ireland’s Assembly. Yet two recent elections in both the Republic and Northern Ireland might have forever changed this dynamic. As Sinn Fein witnesses a surge in political support, the question of whether the organization can ever move past its historical association with violence has come into focus, presenting larger questions as to the political normalization of groups previously associated with the terrorism label.

In the last year, two elections shook the foundations of Ireland’s political scene. During the December 2019 UK General Elections, Irish Nationalist parties won a majority of the votes in Northern Ireland, the first time the Assembly has ever seated more Nationalists than pro-UK Unionists. More recently, In an electoral earthquake in February 2020, Sinn Fein landed the largest share of votes in Dáil Éireann, Ireland’s parliament, overtaking the two dominant center-right parties that have exchanged power since independence.

Part of Sinn Fein’s newfound success may lie in the symbolic break from the past under a new generation of Republican politicians. Sinn Fein’s leader, Mary Lou McDonald, has never been a part of the IRA and joined Sinn Fein only after the Good Friday Agreement ended Provisional IRA violence in Northern Ireland. In the 2020 Irish Elections, Sinn Fein positioned itself not as the political heirs of armed resistance, but as a left-wing alternative to the more center-right politics of the two dominant parties, emphasizing fair housing prices over Irish Unification. But even under a larger generational shift away from the conflict, Sinn Fein’s historical baggage has caused Ireland’s two other major parties to reject a governing coalition with the party. Meanwhile, in Northern Ireland the nationalists’ victory has masked a loss in support for Sinn Fein as voters have migrated to less polarizing parties, such as the SDLP and Alliance Party.

On both sides of the border, Sinn Fein’s history has hindered it from forming cross-border political dominance that could lead to political unification of the island. Although the party has experienced electoral success that would have seemed unimaginable 40 years ago, the terrorism association remains a substantial obstacle — one that Sinn Fein may not be able to overcome.

Given these realities, Sinn Fein presents an interesting case for the question of if former terrorist or insurgent groups can successfully transition away from the stain of past violence in a political process. While Sinn Fein attempts to reposition itself along the lines of leftist politics rather than sectarian identity, the memory of the IRA has remained strong enough to prevent the party from being fully normalized. Fair or not, the terrorist label remains, 25 years after the conflict officially ended.

In his 2004 paper “Terror, Terrorism, Terrorists”, Charles Tilly states that the “terrorist” label becomes defining for any group that commits acts of terror or terrorism, to the point that a group’s non-terrorism activities and goals become submerged by its acts of violence intended to cause terror. Once identified as “terrorists,” political compromise becomes untenable with organizations linked to acts of terrorism, even after such groups have abandoned violence. For Sinn Fein, while “The Armalite and the Ballot Box” strategy may have permitted electoral success, the strong memory of the Armalite – a weapon used for decades as the IRA’s preferred tool for assassinations – has for now closed the door to achieving political power. The terrorist label persists, years after the men and women who committed acts of terror have been replaced by a generation that hardly remembers the conflict. This reality extends beyond Northern Ireland, from the political toxicity of forming coalitions with Spain’s Basque and Catalan Nationalist parties to the ethically and politically fraught prospect of forming a Taliban power-sharing agreement in Afghanistan.

Yet keeping formerly terrorist-linked parties out of government poses its own risks. In Northern Ireland, the dissident Real IRA has been linked to the nationalist political party Saoradh, which has capitalized on some nationalists’ discontent with the speed of the political path towards Irish Unification and has been connected to recent shootings and deaths, including of Northern Irish journalist Lyra McKee. Even as Sinn Fein is rejected in the Dáil Éireann for past violence, still more extreme organizations wait on the sidelines, prepared to return to violence to achieve their aims.

It is of course up to the people of the island of Ireland to determine whether Sinn Fein can be separated from the terrorist label and be allowed to move past its historic support of violence. For now, the elections in both the North and South have shown that the debate over Sinn Fein’s legitimacy and normalization has not subsided, even as more and more Irish voters seem prepared to offer the political party a second look.

Devin Windelspecht is an MSc student in Conflict, Rights and Justice at SOAS University of London and the current Editor in Chief of (Re)imagining Peace + Justice. Prior to SOAS, Devin worked in journalism in Bosnia and Serbia and conflict reconciliation in Northern Ireland. View all posts by Devin Windelspecht

One thought on “Can Sinn Fein Move Beyond the IRA? The Future of Ireland’s Republican Party”