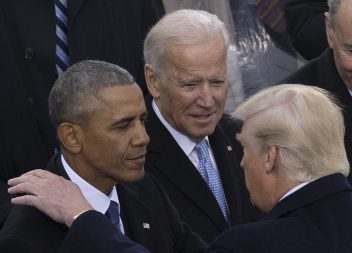 America has beaten its chest for decades claiming to be the world’s “greatest democracy”, at the top of its lungs, loud and clear, for everyone to hear. It has portrayed itself as the saviour and purveyor of peace, often to those evil Middle-Eastern folks who might have some naughty toys they shouldn’t have (by toys I mean Weapons of Mass Destruction).  However, has America really ever been a peaceful democracy?

There has long been a discussion of the relationship between democracy and peace. The democratic peace theory tells us that democratic countries tend to have relative peace since they share ideological similarities and would not be interested in fighting one another, as well as with other states. America has proven such a concept wrong in several ways.

First, America has taken it as its mission for decades to expand democracy in order to bring peace, which helped justify its international campaigns on the “War on Terror” since 2001. Such missions have worsened the situation in countries such as Iraq or Afghanistan. When Trump took office, he promoted an agenda of “leaving the wars”, and one can say he left some wars. As we speak or sit down with our morning tea, the Taliban and the Afghan government are discussing peace talks with little US intervention. However, under the Trump administration, several acts such as airstrikes in Syria or the killing of a senior Iranian general were made as an executive order outside Congress, which (normally) passes the legislation, especially in matters of war.

Second, peace is a controversial concept within America’s own borders. Is America really peaceful when extrajudicial killings and further human rights violations take place? Is America really peaceful when Black Lives Matter supporters and Trump supporters are treated in very different ways? As we saw last month, white supremacists and far-right movements stormed the Capitol and walked through its corridors, parading confederate flags, while months before, Black citizens couldn’t even walk the streets of their neighbourhoods without police assault. If anyone had any doubt that racism still existed in the US, well, let us just assume this would be (even more) evidence that it is very much alive and well. If we understand peace in line with the great scholar Johan Galtung, as not merely negative peace – the absence of war – but as positive peace – the absence of structural violence – then is America peaceful?

Now that Trump has left, we wonder, what will Biden’s position be on matters of foreign policy? And, particularly, how will he position the US in terms of international peace? If we look at Biden’s Mandate under the Obama administration, it is important to remember that Obama entered not one, not two, but nine international military interventions – Libya being one of them -, with Biden serving as Vice-President. While Obama might have done some good – signing the Paris Agreement, which is now back on Biden’s to-do list – his time in office was hardly peaceful

And since (unfortunately) the power of the North still looms over the world, we must be alert to what Biden imagines peace and democracy to be.