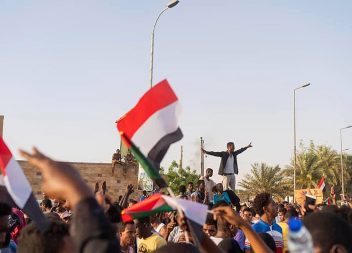 The recent toppling of authoritarians in Algeria and Sudan have the potential to breathe new life into the hope of democracy for North Africa, years after the “Arab Spring.” Yet even as the Sudanese and Algerian people have appeared to have learned important lessons from the events of 2011, fundamental obstacles still stand in the way of democratic transition that echo the failures of the Arab Spring.

By 2019, the eighth anniversary of the Tunisian Revolution, the hopes of the Arab Spring appeared all by extinguished. Within the span of a few years, popular movements that carried the potential to bring about dignity, accountability, and democracy for the people of the Middle East and North Africa were overwhelmed by renewed government repression and the new conflicts of the “Arab Winter.” Then on 2 April, Algeria’s Algeria’s 20-year president, Bouteflika, stepped down after mass protests over his planned 5th consecutive term in office. Nine days later, Sudan’s 30-year dictator, al-Bashir, was removed by the Sudanese military following months of citizen mobilization. Within weeks, journalists and pundits were already describing these twin revolutions as a “second Arab Spring.”

It’s not a coincidence that two nations, which largely avoided demonstrations in 2011, are now witnessing the toppling of some of the region’s most powerful strongmen. On the surface, the Sudanese and Algerian uprisings appear almost as a delayed second act to the 2011 uprisings, and even have followed a pattern similar to the cases of Tunisia and Egypt: the formation of peaceful and sustained popular mobilization, whose aims were made reality once popular pressure caused military and government structures to eventually turn on the regime. On closer inspection, however, the protesters who brought down Bouteflika and al-Bashir have learned important lessons from the Arab Spring—namely, that democratic transition does not stop with the removal of a single figure and the need for commitment to continue to put pressure on the state even through the transition period.

In Algeria, protesters have already set their sights beyond the immediate fall of Bouteflika, with peaceful protesters calling for the removal of the prime minister and interim president, figures which remain representative of the power structures of the Bouteflika regime. By turning out every Friday to insist on transparency and the inclusion of civil society in the transition period, including free and fair elections under reformed rules, Algerians have signaled that challenging  le pouvoir—or “the power”—goes beyond the removal of Bouteflika and instead requires a radical restructuring of state institutions and the electoral process.

Sudan faces perhaps more difficult hurdles—with the difference being the military’s forcible removal of al-Bashir and its significant control over the post-Bashir transition. In a situation that resembles the post-Mubarak military transition of Egypt in 2011, the Sudanese military and security forces have recently inflicted violence against protesters that have mobilized against the military junta, in the process jeopardizing the breakdown of military-protester negotiations. Despite this, protesters have maintained peaceful methods, and, like in Algeria, have continued to protest and call for a civilian-led transition, with a message that democratic aims would not be settled by the merely the election of another authoritarian figure with military support.

Neither outcome is guaranteed to end in democracy. If anything, the events of the Arab Spring show just how ingrained military and government power structures are in the region—and just how delicate democratic transition can be even after a given leader has fallen. In Egypt, a military coup in 2013 has resulted in a government just as repressive and violent as the Mubarak era; in Bahrain, a violent Saudi-led intervention resulted in the crackdown of political dissidents; and in Libya, Syria, and Yemen, conflicts whose origins are derived from 2011 continue to be waged with varying levels of intensity. The shadows of the Arab Spring’s failures loom large over Algeria and Sudan, both of which experienced their own horrific civil wars not too long ago, and whose current power brokers will be loathe to give up control to civilian administration. In this environment, the use of violence to maintain power is all too possible a reality under the transitional, military-led regimes.

So too do Algeria and Sudan face a different international community than existed in 2011, with the foreign policy emphasis on security over democracy and human rights—which already largely guided Western policy in Libya, Syria, Bahrain, and Egypt during the Arab Spring—even more pronounced than it was eight years ago. Without external pressure to respect a civilian transition, military leaders in Sudan and Algeria might feel emboldened to violently crack down on protesters, knowing well how little pushback they will receive from the likes of President Trump or Italian strongman, Salvini.

That is not to say that the Algerian and Sudanese revolutions are doomed to fail; in fact, the protesters who brought down Bouteflika and al-Bashir have already made great strides beyond what was accomplished by many countries during the Arab Spring, and have remained peaceful despite instances of military violence. These steps don’t guarantee a peaceful transition, but they send an important message that democratic, civilian government is the end goal of the revolution, and that citizens will not easily settle for the mere replacement of another autocratic figure.

No matter their outcome, the April revolutions reveal that the desire for rights, dignity, and freedom is still very much alive across the Middle East and North Africa—and always has been. Sudan and Algeria show that even under the most long-standing and repressive regimes, change is in fact possible, through the actions of the Sudanese and Algerian people themselves who dare to struggle for a better future. While the events of April may not yet point to a “Second Spring,” they do suggest that the Arab Winter, regardless of how long it lasts, will one day thaw.

Devin Windelspecht is a graduate of an MSc in Politics of Conflict, Rights and Justice at SOAS University of London and the current co-Editor in Chief of (Re)imagining Peace + Justice. View all posts by Devin Windelspecht