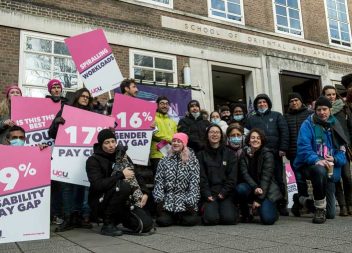 Trade unions UCU and UNISON saw their members  taking further strike action from Monday 21st to Friday 25th March 2022. This is the latest move in a long saga as employers refuse reasonable negotiations on pay and working conditions and “force through” pension cuts despite the efforts of 68 UK universities who have already undergone 10 days of strike action between 14th February and 2nd March this year.

University teaching and support staff have been protesting to tackle five main concerns: cuts to pensions, cuts to pay, precarious employment, pay inequality and unsafe workloads. It is estimated that on average university staff are set to lose 35% of their pension and since pay has dropped by 20% in the last 13 years, staff are essentially working for free one day every week. Additionally, there is a 9% ethnicity pay gap across the sector and a 14.8% gender pay gap. Alongside this, staff have been required to work more and are given unmanageable workloads, an established practice that has only been further compounded by the pandemic. The physical and mental health of staff has been detrimentally impacted with over half showing signs of depression.

SOAS students have an important history in standing alongside workers’ struggles and have played a fundamental role in bringing about effective change in the past. Similarly with recent strikes, students have been consistent and unrelenting in their support, participating in Walkouts, standing alongside the picket lines and attending Teach Outs. Some have even gone to great lengths and occupied management offices and have in-turn been subjected to security violence, intimidation tactics, threats of legal action and denial of basic facilities. Students are willing to put their own welfare at risk because they value the importance of fair and civil leadership, they support the right to fair and equal pay for teaching and support staff alike and recognise the impact that staff working conditions have on their learning.

SOAS is a university that prides itself on its equality, diversity and inclusivity and through promotion of such values attracts its student customer base. It is therefore utterly disingenuous and hypocritical for it to not only be complicit in maintaining unequal and unliveable work conditions of its staff but to also be actively involved in suppressing them from protesting and voicing their concerns.

To regain the trust and confidence of students and staff at SOAS, students are demanding that management must “do everything in its power to prevent any disruption caused by the employers’ attack on pay and pensions by encouraging employers to re-enter negotiations with the Unions as soon as possible and to voice in UUK to put pressure on USS to implement the UCU proposals, which USS recently said were viable and implementable”.

Finally, as staff and student union members we must remember to always be compassionate and inclusive in our fight for better working and learning conditions. Let us recognise that whilst prioritising the needs of our own union is important, we must also extend ourselves in actively promoting  and supporting  the demands of more exploited staff. Perhaps that is a greater moral use of our strike action – protecting the weakest members of our community.