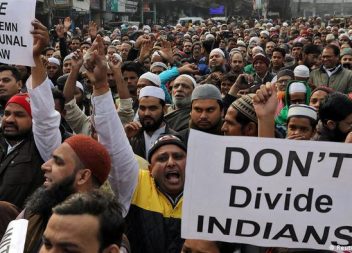 This weekly briefing is being published in retrospect due to the CCRJ solidarity with the 2022 University Staff Strike.

The Hindu nationalist movement (popularly known as Hindutva) is known for its conservative position and Hindu supremacist ideology. Since 2014, the Bharatiya Janata Party-led (BJP) government has been the political force translating the ideology into policies and governance. It has once again flared up controversy by pursuing policies that target religious minorities in India. One instance of this is the number of institutions in the state of Karnataka which are witnessing protests predominantly led by upper-caste Hindu students against their Muslim peers wearing hijab in class.

In January 2022, six female students in the Udupi district were denied access to their college campus for donning the hijab. Since then the state, with a BJP government at the helm, has witnessed similar incidents where students wearing hijabs were not allowed to enter their institution’s premises. In some cases, radical Hindu organizations mobilized Hindu students to protest against their Muslim peers by wearing saffron scarves, claiming that there was no equality in allowing religious clothing in “secular educational” spaces. There are video reports of saffron-clad men heckling women wearing hijab and burqa.

A Muslim girl student filed a writ petition in the Karnataka High Court against institutions claiming that Article 14 and 25 of the Indian Constitution guarantees theirright to practice their religion and should protect them from discrimination. The State Government shutdown  colleges for three days until the High Court announced its decision on the matter, but the High Court has only passed an interim order so far, to prevent students from wearing any religious clothing until the final order is out. This order has established a false equivalence between hijab and saffron scarves: unlike the hijab, worn by only some Muslim women as part of their religious expression, the purpose of saffron scarves has been to intimidate Muslim women.

Any observer of Indian politics would not find it surprising that a communal issue on religious lines has been instigated in a state with upcoming polls. Karnataka will be due for its Legislative Assembly elections in May 2023 and will be one of the few states where the Prime Minister’s Bharatiya Janata Party (BJP)  will be in direct competition with its principal national opposition, the Indian National Congress (INC). The last elections to the house in 2018 resulted in a hung assembly with BJP winning more seats despite INC winning the popular vote.

BJP has been known to instigate communal issues in poll-bound states and foster a polarised atmosphere to score electoral points and support. In 2021, civic bodies in Gujarat state, where elections will be taking place in December 2022, announced regulations against the sale of non-vegetarian food in public spaces. The Delhi riots in 2020 and the demonization of Shaheen Bagh protestors (which was led by Muslim women in the Delhi neighbourhood) occuredjust before the Delhi elections in May 2020. A similar attempt was made to demonise farmers’ protests as a Khalistani plot in January 2021 as the year-long movement was led by farmers from Punjab and Haryana, states with significant sikh populations. But the government had to concede as Punjab is due for polls in February 2022.

It is a recurring strategy and somewhat tired script of Hindu nationalists to target religious minorities and impose hypocritical standards.  Despite empty political declarations to the contrary, the promise of secularism has always been in contradiction to the Hindutva project. Hindu nationalists, led by the BJP, argue that secularism is a tool of appeasement for minorities which is why there has been a systematic attempt at subverting the constitutional promise of equality.

Prime Minister Modi, a member of the BJP, promised an “inclusive India” after winning his second term in 2019 but his party has continued to engage in communally polarising election strategies across the country. This controversy over hijabs has created tensions and division among students who were previously studying together, disrupted Muslim female students from accessing their educational institutions ahead of their final exams and set a disturbing precedent of religious discrimination. It is imperative that Mr Modi intervenes and reassures his commitment to his promise.